For the past two years and then again this year, the Sinn Fein culture minister Caral ni Chuilin has operated a 'cultural programme' under which she has handed money over directly to the West Belfast Festival, Feile an Phobail.

In order to fund this new programme she has operated a 'smash and grab' policy, taking money away from other organisations and other programmes.  This may help to explain why she abolished the scheme to part-fund musical instruments for bands.

Under her own 'semi-secret' programme Feile has retained the largest portion of the money handed over to it and has then distributed the remainder to other groups which it has selected.

There was no advertisement in the press inviting arts and cultural organisation to apply; there was no application process; there was no assessment process and there were no criteria by which applications were assessed.  Instead she and her department invited the West Belfast Festival to run this 'cultural programme'.

In year one of the 'cultural programme' the amount given to Feile was £479,000 with £21,000 for marketing and communications - a total of £500,000.  Of the £479,000 Feile an Phobail kept £254,000 with £115,000 going to the McCracken Cultural Society, an Irish language organisation in the minister's constituency of North Belfast, and another £110,000 going to the Belfast Film Festival, which was originally the West Belfast Film Festival and was founded by Laurence McKeown, an IRA hunger striker, as part of the Feile family.

I have already written about some of this today in my weekly column in the Belfast Telegraph and next Thursday Caral ni Chulainn and her officials will appear before the Culture, Arts and Leisure Committee at Stormont to answer questions about this and other matters.

However there are just so many angles to this story that it is impossible to cover them all in one article, so here is another one. 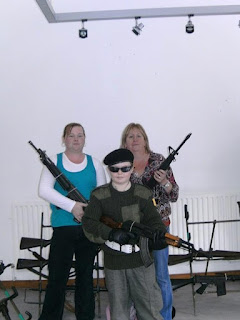 Ti Chulainn was established in 1999 as an Irish language centre in South Armagh, close to the border in Mullaghbawn, but over the years it as acquired a very distinctive ethos.

You may not be a regular visitor to the area and you may not have had the opportunity to visit the cultural centre but it has hit the headlines on several occasions.  The most notable was in 2011 when photographs appeared on the internet of children who were attending the centre and who were dressed as IRA terrorists, holding replica weapons.

Of course that is not the only reason why the Ti Chulainn centre has been in the news.

As a cultural centre, one of its attractions is in the grounds outside and that is the Provisional IRA memorial, dedicated to the men and women of the IRA in South Armagh.

It was unveiled and dedicated on 3 October 2010 and the main speaker at the dedication was Deputy First Minister Martin McGuinness MLA, while Megan Fearon of South Armagh Ogra Shinn Fein, now an MLA, read the IRA roll of honour, and Conor Murphy MLA, then Minister for Regional Development, handed over presentation to the families of the 'South Armagh patriot dead'. 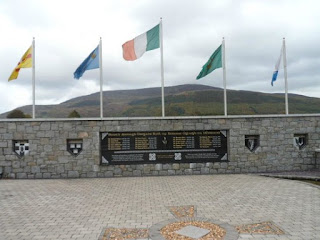 So a Sinn Fein minister hands over money, with no application process, to an organisation with four directors who are members of Sinn Fein, and then they hand on £10,000 of that DCAL money to a centre that is home to an IRA memorial.  Yes I think we get the picture!  It isn't too difficult to work out why Feile an Phobail chose this as the only rural organisation in the whole of Northern Ireland to benefit from this Sinn Fein minister's programme.

This is just one of the issues that Caral ni Chuilin will have to explain next Thursday because, as the comedian Jimmy Cricket used to say, 'There's more.'

The plain truth is that she has imposed Sinn Fein cuts on arts and cultural organisations and programmes across Northern Ireland and has thereby damaged much of the cultural and artistic life of Northern Ireland in order to create a 'cultural war chest' for this and other equally dubious schemes.

Interestingly SDLP politician Dominic Bradley MLA, who is an Irish language enthusiast and an Irish teacher,had been a director of the company Ti Chulainn Ltd from 19 December 1994 but resigned as a director on 1 January 2010,, nine months before the IRA memorial was unveiled.

Posted by Nelson McCausland MLA at 14:47 No comments: