A great Ulster-Scots soldier from Brookeborough

He married Rebecca Lyon (1719-1797) and they emigrated from Ulster to Pennsylvania around 1740, along with her brother John Lyon.

There he was a surveyor to the Penn family, the proprietary owners of the colony.

He laid out the first plan for the town of Carlisle in Pennsylvania and was one of the first settlers.

Armstrong was also a militia commander in the Seven Years War and a good friend of George Washington.

In the early stages of the Revolutionary War, John Armstrong was a brigadier general in the Pennsylvania militia and was then appointed to the same rank in the Continental Army.  He fought at the Battle of Brandywine and the Battle of Germantown and after the war he returned to Carlisle.

John Armstrong was appointed to the Continental Congress as a delegate from Pennsylvania from 1779 to 1780 and he died in Carlisle on 9 March 1795.

His sister Margaret Armstrong (1737-1817) married Rev George Duffield (1732-1790), the Presbyterian minister in Carlisle, and John Armstrong was an elder in the congregation.

The Duffields were an Ulster-Scots family and George Duffield's father had emigrated from Ballymena to America.

Posted by Nelson McCausland MLA at 09:41 No comments:

A false and flawed argument for an Irish Language Act

On Saturday the News Letter published a letter by Ian Parsley in which he  set out the case for an Irish Language Act.

One of the key points was that this would bring Irish Gaelic in Northern Ireland into line with Scottish Gaelic in Scotland and Welsh in Wales.

It was almost like saying that it is the 'British' thing to do.

However it is a flawed and false argument as I set out in the following letter, which appeared in the News Letter today.


In his letter (14 October) in which he supported ‘comprehensive Irish language legislation’, Ian James Parsley stated that this would ‘bring Northern Ireland largely into line with equivalent jurisdictions, notably Scotland, in providing a legislative basis for promotion of Celtic languages.’  He also said that we should be ‘willing to learn from good practice in the rest of the UK’.

Ian Parsley takes a keen interest in minority languages, as does his wife Paula Bradshaw, the Alliance Party MLA for South Belfast.  Indeed she was the person who represented the Alliance Party at a Conradh na Gaelige photoshoot on 30 August in support of a standalone Irish Language Act.

Both Ian and Paula have used this ‘rest of the UK’ argument in support of an Irish Language Act.  Are they not aware of the situation in England?

The Alliance Party is entitled to argue for an Irish Language Act but then others are entitled to point out that this argument is fundamentally flawed and thoroughly disingenuous. 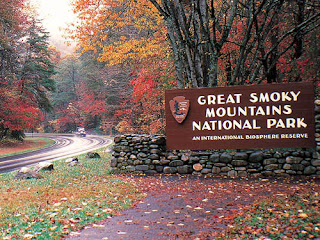 I have just discovered that Nelson's View is also the name of a holiday cabin in Maggie Valley in North Carolina, just to the east of the Great Smoky Mountains National Park.  I own this Nelson's View but am disappointed now that I don't own the other Nelson's View!

Then there is a website called Nelson's View, which belongs to a professional photographer named Nelson Rodriguez, who lives in Florida.

So I look out at the rain and think about North Carolina and Florida .....

Posted by Nelson McCausland MLA at 07:33 No comments:

Last Friday I visited the Robert Burns cottage in Alloway, the place where he was born.

Since then I have been thinking about the number of Burns Clubs in Ulster and one in particular has taken my attention, the Burns Club in Londonderry.

For more than fifty years there was a Burns Club in the Maiden City. It seems to have been formed in 1907 as the Londonderry Burns Club and Caledonian Society. and there are regular newspaper reports of Burns Suppers and other social and cultural events through until at least 1957.

This was one of a number of Burns Clubs in Ulster, where there was a particular affection for the poetry of Robert Burns and there were also clubs in Belfast and Larne.  The first to be formed in Ulster was the club in Belfast and the Belfast Burns Association still meets but the Londonderry and Larne clubs ceased to function some years ago.

At one time it was said that in many homes in Ulster there were but two books, the Bible and Burns.
Posted by Nelson McCausland MLA at 11:06 No comments:

A worldwide web of the wealthy and powerful

A number of British newspapers have reported comments made by Jeremy Shapiro at the Cheltenham Literature Festival about the 'special relationship' between the USA and the United Kingdom.

Shapiro, who worked as an adviser to Barack Obama, said that the relationship was unrequited and that US officials would make jokes about it behind the scenes.

I could well believe that Barack Obama's administration took that view and I am sure we all remember how Obama turned up to support David Cameron's failed campaign to win the referendum to stay in the European Union.  That US president wanted to deny us OUR 'independence day'.

But what about the man making the claim?  The newspaper report state that Jeremy Shapiro worked as an adviser in the US State Department under Obama and now works as research director at the European Council on Foreign Relations (ECFR).

I must admit that I had never heard of Jeremy Shapiro or the European Council on Foreign Relations so I decided to browse aroudn on the internet for some background information.

The ECFR is a private pan-European think-tank, which I would describe as internationalist liberal elite.  It is funded by private donations; so who is it that 'pays the piper', because very often whoever 'pays the piper, calls the tunes'?

Its partners and funders are foundations, corporations, governments and individuals.

FRIDE closed down in 2015 for financial reasons but Open Society Foundations is still very much alive and active.  It was founded in 1993 by the culturally-subversive George Soros and may be the largest 'philanthropic' organisation ever established, with branches in 37 countries.

Soros was educated at the London School of Economics where he was a student of the Marxist Karl Popper and today he is a business magnate worth more than $25 billion.  He is a multi-billionaire and uses his wealth to influence politics in many countries.  He advocates a federal Europe, opposes Israel,  backs euthanasia and has supported more liberal drug laws in America.

This is just a small insight into the worldwide-web of the wealthy and powerful and the organisations and institutions they use to promote their worldview.  It is a world about which most of us know very little and I suppose that is the way they want it.


Posted by Nelson McCausland MLA at 05:22 No comments: