In an interview in the Belfast Telegraph on Thursday 6 August Paul McCusker , one of the organisers of the Ardoyne Fleadh, said, 'The Fleadh is very positive.'
The interviewer, Lyra McKee, then assured readers that 'Since then the Fleadh committee has put in guidelines for performers to ensure there isn't a repeat of the incident this year.  Open air concerts this weekend will see Irish reggae band  Breagh and pop act Fusion play with The Wolfe Tones headlining on Sunday night.
The columnist also noted: 'At the end of its Press Release it says: 'Ardoyne Fleadh is very much welcomed by the people of Ardoyne and we would like to extend a hand of friendship to our Protestant neighbours.''
So how did they extend a hand of friendship to their Protestant neighbours?  They subjected them to another Rebel Night with The Wolfe Tones, the grandfathers of 'rebel music'.

Someone who was there had posted a short Youtube clip of the performance, which showed that nothing had really changed.  My DUP colleague Brian Kingston then commented on this and the band responded but the Youtube clip seems to have been taken down.
Posted by Nelson McCausland MLA at 06:31 No comments: 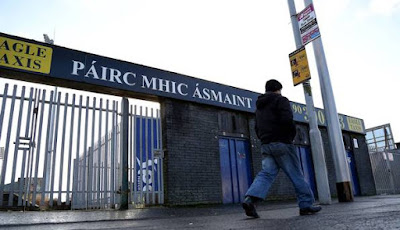 The Culture Arts and Leisure committee at Stormont is to meet next week to consider the Project Assessment Review (PAR) on the DCAL stadia programme, which was published this afternoon, and the Minister, Caral ni Chuilin and her Permanent Secretary have been asked to appear before the committee.
‘This report vindicates the decision by the committee to conduct its own inquiry into the emergency exiting arrangements for Casement Park,’ said the committee chair, DUP MLA Nelson McCausland.
‘Once again the Sports minister Caral ni Chuilin has treated the committee shabbily.  The report was given to the media at 1.00 today but the committee members were only allowed to see it when it was put on the DCAL website at 4.00.  This gave the department three hours to brief and to carry out a damage limitation exercise.’
‘The PAR confirms that there are ‘major issues’ with the Casement project and we will want to consider the detail of the report carefully.  We will also want to interrogate its contents.  It will certainly inform our own inquiry, which will resume in a few weeks at the start of September, and will form part of the evidence.’
‘However our report will be more focussed and in-depth and will receive evidence from a wider range of people.  Some of those who will be coming to the committee in September were not contacted by those carrying out the PAR.’
DUP MLA and committee member William Humphrey said, ‘This report is a damning indictment of the department and the way it has handled the Casement Park project.  It is no exaggeration to say that it has been shambolic.  The minister Caral ni Chuilin is at the head of the department and she must take responsibility for what has happened under her watch.’
‘The report identifies serious governance issues within the project and confirms that there has been a shortage of skills, capability and experience in some parts of the programme.’
‘None of this would have exposed and the flaws in the system would have remained uncovered if it had not been for the intervention of Sport NI safety expert Paul Scott.  He must be congratulated for his courage in coming forward and it is imperative that his expertise is utilised to the full as the project is taken forward.’
‘Up until now the Senior Responsible Owner in DCAL has been the deputy permanent secretary Cynthia Smith.  However this review recommends that she be removed as the SRO and replaced by a new full-time appointment.  That is highly significant as the report says that the previous arrangement is an arrangement seen elsewhere.’
‘This review does nothing to remove the cloud hanging over Caral ni Chuilin for her oversight of the Casement project.’
Posted by Nelson McCausland MLA at 10:26 No comments: 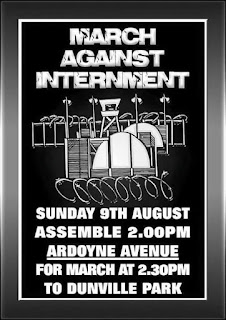 The Anti Internment League is an alliance of dissident republican groups including members of Erigi, Republican Network for Unity and the 1916 Societies.
It held its first march through the centre of Belfast in 2013 and the organiser was Dee Fennell, a dissident republican from Ardoyne who is a member of the 1916 Societies and spokesman for the Greater Ardoyne Residents Collective, the dissidents' 'residents group'..
This year the organisers stated that they expected 5,000 participants, 4,000 supporters and 14 bands. They intend to start at Ardoyne Avenue and then make their way down the Cliftonville Road through the New Lodge Road and North Queen Street to Royal Avenue and then up Castle Street, Divis Street and Falls Road to Dunville Park.
The Parades Commission has approved the march but with the restriction that it must be past Millfield and away from the city centre before 1.30 pm.  However the Anti-Internment League have stated that they will only leave Ardoyne at 2.30, so there is no way they can make the 1.30 deadline - barring time travel! 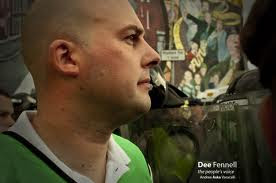 When the determination was announced UTV contacted the organisers for an interview they said they would not put forward a spokesman in protest at the strict bail conditions on their chair, Dee Fennell.

These conditions were imposed on Fennell after he was changed with encouraging terrorism ad inviting support for a proscribed organisation.  The charge related to a speech given by Fennell in Lurgan on Easter Sunday.  The event at which he was speaking had been organised by the Irish Republican Prisoners Welfare Association and the bail conditions included a ban on public speeches.
However the Anti-Internment League issued a statement on social media condemning the restriction on timing, stating that they would break the determination and threatening the PSNI and the Army: 'The Anti Internment League ask all republicans, nationalists and human rights advocates to join with us at Ardoyne Avenue at 2pm on Sunday 9th August.  The days of 'croppy lie down' are over, let the State militia of the PSNI and British Army try to stop us.'

This morning I was on the Nolan Show on Radio Ulster about this and the other contributor was the Erigi spokesman in Belfast Patrick McCotter, otherwise known as Paddy MCotter or Padraic Mac Coitir, who was speaking in support of the Anti-Internment League march.

He was for many years a member of the Provisional IRA and according to The Independent (11 September 1994) he was jailed for 20 years for involvement in a gun battle with the police. His brothers Liam and Sean also served prison sentences for IRA-related terrorist offences and his uncle Seamus Twomey was twice chief of staff of the Provisional IRA. 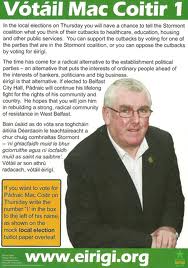 Back in 2004, while McCotter was still within the Sinn Fein fold he was associated with the launch of An Phoblacht (30 October 2004) explained that the name of the club was taken from the writings of hunger striker Bobby Sands.
a new GAA club in Twinbrook, Cumann na Fuiseoige.  He chaired the proceedings to launch the club and Gerry Adams was the speaker, while Miceal Greenan, chairman of the Ulster Council of the GAA, officially launched the club.  Subsequently, an article in

By 2014 McCotter was a member of Erigi and stood in the Blackmountain area of West Belfast in the local government elections.  He had been expected to gain a seat but performed badly.

During the interview this morning McCotter was pressed by Stephen Nolan to condemn the murders of soldiers and other acts of terrorism but of course he refused to do so.  His contribution was nauseating and exposed once again the true nature of Erigi and other dissident republicans.

So tomorrow I will meet senior PSNI officers, along with my colleague William Humphrey, to press them on how they intend to police the weekend parade.  They got it badly wrong in Londonderry and we must hope they have learned some lessons.

Posted by Nelson McCausland MLA at 12:00 No comments: