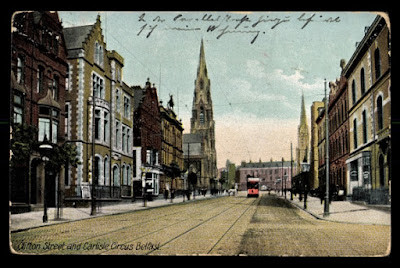 Clifton Street in Belfast is a name that appears in the news from time to time and it is really the 'gateway to north Belfast'.  The postcard above reminds us of how it used to look and sadly many of the fine buildings that once lined both sides of the street have now gone.

The words loanen and loaney are found in both Scots and Ulster-Scots meaning a lane or roadway and this was indeed a path leading from the town of Belfast out to the north and in the 18th century, into the countryside.

According to A History of Congregations in the Presbyterian Church in Ireland, he was a son of the second Presbyterian minister in Ballymena, who was a Scottish Presbyterian.  After the formation of a presbytery in Ulster, David Buttle was ordained in 1645 and ministered in Ballymena. He was imprisoned under the Protectorate of Oliver Cromwell for refusing to take the 'republican engagement' and was not released until 1650.  He was also deposed by Bishop Jeremy Taylor in 1661 for refusing to conform. Thereafter he ministered privately to his people until his death in 1665.

This was just one of many loanens and loaneys in Belfast at that time, and they reflect the Ulster-Scots influence in the place-names of Belfast.

David Buttle's term as sovereign ended in 1704 and one source indicates that during that year George McCartney took over as Sovereign.  That may have been because David Buttle died in that year or alternatively it may have been because of the Test Act of 1704.  The Test Act required all those holding office to take communion in the Church of Ireland.  There were very few Roman Catholics in Belfast at that time but there were many Presbyterians and any burgesses who were Presbyterian had a choice of taking communion in the Church of Ireland or being removed from their position.  Some conformed to the Test Act but others refused and were then removed.

There is certainly some reading and research to be done to find out a little more about this David Buttle. 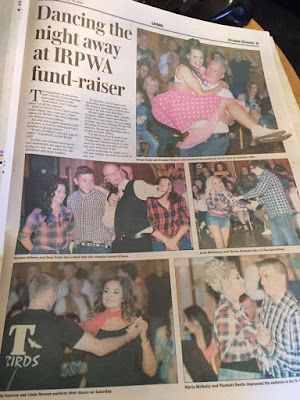 Is there no end to it?  It seems now that every shade of Irish republicanism is determined to produce its own rather 'down market' version of that great institution of the British Broadcasting Corporation, Strictly Come Dancing!

First of all it was Sinn Fein and they led the way with their version of Strictly, which took place in the less than salubrious surroundings of a business park in Jonesborough in South Armagh.

Now even the Irish Republican Prisoners Welfare Association (IRPWA) are at it, but at least they have moved to a more up-market location with the Fir Trees Hotel in Strabane, or to be more precise, across the border in Lifford..

However I was deeply disappointed to see that they had settled for a 3-star hotel.  They really are letting the standards slip.  On the other hand it is a step up from the business unit in Jonesborough that Sinn Fein used.

But more serious still is the fact that even the most extreme republicans are now unashamedly borrowing from the hated 'Brits' when it comes to fund-raising!

Anyone wanting more information can refer to the IRPWA Strabane Facebook page, which includes a commendation from a Mandy Duffy, who is probably the same Mandy Duffy that is a sister-in-law of the infamous Colin Duffy.

Posted by Nelson McCausland MLA at 15:44 No comments: