The New Lodge mural that celebrates a unionist 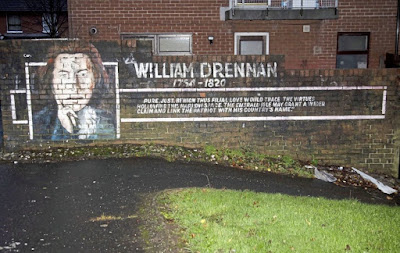 This photograph of a wall mural appeared recently in a local Belfast newspaper.

The mural is in the Nationalist New Lodge Road area of north Belfast and depicts Dr William Drennan (1754-1820), a Belfast-born Presbyterian who was the founder of the Society of United Irishmen.

Most of the murals in that area depict Irish republicans so it is nice to see that they also have a mural of a former United Irishman who became reconciled to the Act of Union.

Indeed in the Belfast Monthly Magazine on 31 December 1811 he urged his readers to:

Be Britons with all your souls - and forget that your father called himself an Irishman.

Now the mural, as we see it in the photograph is not in great shape.  It clearly needs repainted.  So perhaps when someone gets round to refreshing the mural of William Drennan they might consider a new quotation, such as one above.

Those words would look well on a wall in the New Lodge - 'Be Britons with all your souls - and forget that your father called himself an Irishman.'

Posted by Nelson McCausland MLA at 13:25 No comments:

An Irish-American attack on the Scotch-Irish The Scotch-Irish Society of America was founded in 1889 under the presidency of Robert Bonner (1824-1899), a wealthy New York newspaperman and a Presbyterian Ulster-Scot who had emigrated from Londonderry.

It held its first Congress in Columbia, Tennessee, in May 1889, its second Congress in Pittsburgh, Pennsylvania, in June 1890, its third Congress in Louisville, Kentucky, in May 1891 and a fourth Congress in Atlanta, Georgia, in April 1892.  These continued for a number of years and the proceedings were published in bound volumes.

That fourth Congress ended on 1 May 1892 and a week later it drew an angry response in a weekly Pittsburgh newspaper, the Irish Pennsylvanian, which was edited by John Flannery, an Irish-American activist and a former miners' organiser.

The newspaper, which was also known as the Irish Pennsylvanian and Catholic News, was published from 1890 to 1921 but Flannery was not particularly well regarded by some sections of Irish-American opinion.  When Paul Sheedy wrote to the Fenian leader John Devoy on 11 November 1895 he said of Flannery: 'He is ready to do anything for a dollar.'

Nevertheless his attack on the Scotch-Irish is worth examining for what it tells about Irish-American thinking at that time.

The response to the fourth Scotch-Irish Congress was published under the title THE SCOTCH-IRISH and deployed several fallacies in support of its argument.

The first was to attack the validity of the term Scotch-Irish:

The whole idea of Scotch-Irish is a new-fangled notion, first promulgated in America.  It was born of sheer ignorance, and pharisaical pride.  There never was a true, whole-souled Irishman yet who unless he was ignorant of the facts, would claim such a bastard, mongrel, origin.

The name was not known when glorious Henry Joy McCracken and Henry Monroe led the Irish Northern Presbyterians against the British at Ballynahinch. ... The words Scotch-Irish had not emanated from the brain of some bawbee-scraping lowland Scotchman when old Andrew Jackson, with the fires of Shane O'Neill blazing in his eyes, gave an Irish-American greeting to the British hirelings at New Orleans. ... This Scotch-Irish idea ought to be abandoned.

The author of this diatribe was clearly unaware of the fact that the term 'Scotch-Irish' was recorded in Maryland as early as 1689/1690, a full century before the Henry Joy McCracken took part in the 1798 rebellion and 125 years before Andrew Jackson fought the Battle of New Orleans in 1815.

When the Irish Pennsylvanian published the article in 1892, the term Scotch-Irish had been in use for at least two centuries and yet the writer dismissed it as 'a new-fangled notion'.

The second was to argue that Scottish names were really of Irish origin and one example cited was:

The Lindsays come from one of the Lynotts who escaped the massacre of his family by the Barretts of Tyrawley in Connaught.

In fact the name Lindsay is of Old British and Anglo-Norman origin.  The name was brought to Britain with the Anglo-Normans who came to England with William the Conqueror in 1066. and from there it was taken north to Scotland and was recorded there in 1180.

As regards the Lynotts I understand the name was brought to Ireland by Anglo-Normans or Cambro-Normans who came from England or Wales and settled in Connaught in the 13th century.

So both names have an Anglo-Norman origin and neither has a Gaelic origin!

That article was written in 1892 and in 1897 a number of Irish-Americans formed the American Irish Historical Society, which stridently opposed the use of the term Scotch-Irish.

More than a century later there are still some Irish propagandists who try to deny the legitimacy of those who identify as Ulster-Scots on this side of the Atlantic or Scotch-Irish on the other side.

Moreover they still deploy many of the same false arguments and they often display the same intolerance.

Thankfully their arguments are easily exposed and refuted.

We should be able to celebrate our cultural traditions and cultural identities without castigating or denigrating others.

Posted by Nelson McCausland MLA at 13:08 No comments:

Owen Wister (1860-1938) was an American author and historian.  He is best remembered as the author of The Virginian and a biography of Ulysses S Grant and he was a lifelong friend of President Theodore Roosevelt


Wister was a supporter of the unionist cause in Ulster and in his book A Straight Deal Or The Ancient Grudge (1920) he wrote:

'Americans are being told in these days that they owe a debt of support to Irish independence, because the Irish fought with us in our own struggle for independence.  Yes, the Irish did, and we do owe them a debt of support. But it was the Orange Irish who fought in our Revolution, not the Green Irish.' [p 259]

He went on to quote his good friend Theodore Roosevelt who wrote in his History of New York:
'It is a curious fact that in the Revolutionary War the Germans and Catholic Irish should have furnished the bulk of the auxiliaries to the regular English soldiers;  ... the fiercest and most ardent Americans of all, however, were the Presbyterian Irish settlers and their descendants.' [p 133]

At that time in the early years of the 20th century Irish republicans were endeavouring to gain American support for their cause.  They had support among a core of Irish-Americans but Americans in general were not deceived by fabricated arguments such as that identified by Owen Wister.

His book illustrates the understanding that there was at that time of the Ulster unionist cause in countries such as the United States of America and it is significant that it was penned by someone who was a close friend of some of the leading figures of the day.
Posted by Nelson McCausland MLA at 04:22 No comments: