The former  in  has been included on a list of endangered buildings by the World Monuments Fund, which is based in .  The 2010 ‘watch list’ includes 93 locations of which five are in the United Kingdom and one in the Republic of Ireland. 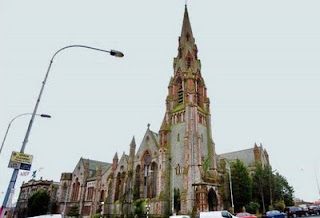 The church was built by Alderman James Carlisle (1810-1882) as a memorial to his only son, who died at the age of 18.  It was designed by the noted  architect W H Lynn and completed in 1875.  At one time it was home to one of the largest Methodist congregations in the city but it closed back in the 1970s and has lain empty and unused for the past thirty years. However it is an imposing building and an important part of the architectural heritage of .  The spire rises to a height of 198 feet and is a well-known landmark.

The Belfast Buildings Preservation Trust has prepared a very thorough report on Carlisle Memorial, looking at the current state of the building and the potential cost of restoration, as well as possible future uses.  It has also campaigned to get Carlisle Memorial on the 2010 ‘watch list’ and I must congratulate Fionnuala Jay-O’Boyle and the Trust on their efforts.

Historic buildings such as Carlisle Memorial are part of our cultural heritage and cultural wealth.  However in the years before the Troubles we lost a number of important buildings because of carelessness and thoughtlessness.  During the Troubles we lost more buildings as a result of terrorism.  Now we need a determination to ensure that we protect and preserve those that survive, protecting them from demolition by developers and bringing those that are empty and derelict back into sustainable use.

I hope that this recognition of Carlisle Memorial on a worldwide list of endangered sites will focus the attention of everyone on the need to preserve and restore this landmark building.
Posted by Nelson McCausland MLA at 05:04