A great night with Cairncastle

The Cairncastle Ulster-Scots group is based in Cairncastle Orange Hall, where they hold a monthly soiree and an annual festival.  Tonight they were launching their latest DVD in the Halfway House Hotel in Ballygally. 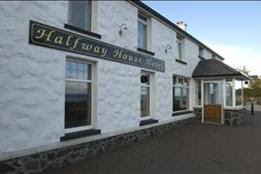 It was a great night and the function room was packed to the doors.  The Grousebeaters were there on stage but there were also musicians from Donegal and even a Queen's University student from Kentucky.
The button key accordion was the most popular instrument but we also had fiddles, flutes, banjos, guitar and drums.  There was also a man from Ballymena who was sitting in the row in front of me playing the tin whistle.  This was community music making at its very best and everyone was thoroughly enjoying the night.
At the interval there was plenty of tea and biscuits and then they were back for another session but I had to leave at that point.  Before going I spoke from the platform and commended Bobby Acheson and his team from Cairncastle for all their good work.  One of the songs that had been sung earlier in the evening was about travelling from Ulster across the narrow sea to Scotland and I commented on the fact that standing in Cairncastle, Ballygally or Ballycarry, and looking across to Scotland, it is indeed so very near.

It was great to meet so many good folk and talk to them and I even met a Presbyterian minister and his wife who were visiting from Australia.
Posted by Nelson McCausland MLA at 15:12