Ullans Press, the publishing arm of the Ulster-Scots Language Society, has just published a 108 page book entitled Some Remarkable Passages of the Life and Death of Alexander Peden, Prophet and Covenanter, in Scotland and Ulster.  It is a reprint of the 1755 Belfast edition and has a new foreword, a biogrpahy of Peden, a selection of historical poems, and several other articles, as well as 26 photographs and illustrations. 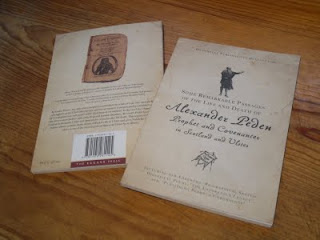 Alexander Peden (1626-1686) was born in Ayrshire and educated at the University of Glasgow.  He was ordained in Galloway in 1660 but he was removed from his parish in 1663.  For the next ten years Peden was an itinerant preacher and spent some of his time in Ulster.
He was arrested in 1673, while holding a conventicle near Ballantrae in Ayrshire, and condemned to four years imprisonment.  After 18 months in prison he was sentenced to banishment to America and was put on a ship but the captain allowed him to leave and he escaped north to Scotland.  His remaining years were spent partly in Scotland and partly in Ulster and towards the end of his life he lived in a cave on the River Lugar, near his birthplace and his brother's farm in Auchinleck.  There he died in 1686, worn out by hardship and privation.
Alexander Peden was buried in Auchinleck churchyard but six weeks later his body was exhumed by government troops, who planned to hang his corpse from the gallows in Cumnock. However William Crichton, 2nd Earl of Dumfries objected to the hanging and instead the troops buried the corpse at the foot of the gallows.
The back cover of the reprint says this about Peden:
Alexander Peden - the man whose prophecies enthralled the rebels of 1798, who lived the life of a fugitive on the Glenwhirry moors, and whose memory is perpetuated by a faithful band of Covenanters who still gather at the Mistyburn in his memory.  In the era of the 'chapmen', the door-to-door pedlars who sold cheap and popular literature, Alexnader Peden fascinated readers in Scotland, Ulster and America for centuries after his death.  This reprint of the 1755 Belfast edition contains many stories of Peden's life in Ulster, and gives Peden his rightful place as one of the most important figures in Ulster-Scots history.

The book costs £6.99 and is available from the Ulster-Scots Language Society, either online or from their office.  The book is almost entirely in English but the historical poems are in light Scots.
Posted by Nelson McCausland MLA at 15:36