At the start of Assembly business today one member from each party spoke under 'matters of the day' in relation to the dissident republican attacks on Saturday. 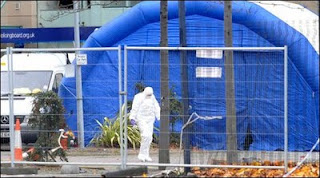 Forensic officers examing the car used in the bomb attack
A car containing a 400 lb bomb was left outside the offices of the Northern Ireland Policing Board in the Laganside area in my own constituency in North Belfast.  Fortunately the bomb only exploded partially, otherwise there would have been extensive damage to property in the area and possibly the loss of a number of lives.  Afterwards a burned out car was found in the New Lodge Road area, a short distance from the scene of the bomb attack, and it is thought to be connected to the dissident republicans who carried out the attack.
Meanwhile in county Fermanagh, there was an attempt to murder a Roman Catholic policeman in the village of Garrison, close to the border with the Irish Republic.  Here the police had mounted a covert opertaion and they arrested three men while a fourth man was arrested across the border in county Leitrim.  The attack on the policeman was reminiscent of the old IRA tactic of targeting Roman Catholic policemen in order to deter Roman Catholics from joining the police.
Posted by Nelson McCausland MLA at 04:29