Gerry's beard will have to go! 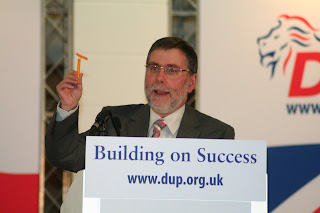 At the recent DUP conference I recalled a prediction by Gerry Adams that there would be a United Ireland by 2016, the centenary of the 1916 Easter Rising.  I also recalled his promise that if it did not happen he would shave off his beard.  Being of a generous spirit I offered to provide him with a razor, on the basis that since there will not be a United Ireland, he will be shaving off his beard!
'Irish republicanism looks back in awe to the rebels, who took to the streets of Dublin in 1916. But for many years it has also looked forward to the centenary year of 2016, one hundred years on from the 1916 Easter Rising. It has even harboured the hope that by 2016 there would be a 32-county United Ireland.  Both Gerry Adams and Martin McGuinness have held out that hope and have promised their followers that the target date for a United Ireland is 2016.
Speaking in New York in January 2000, Gerry Adams said that there was ‘no reason why we cannot celebrate the 1916 Rising in the year 2016 in a free and united Ireland.’  Martin McGuinness has said the same thing. In November 2003 he said, ‘Certainly it is our view that it can be accomplished over a short period. Gerry Adams has said 2016 and I think that is achievable.’  Well, Gerry and Marty, dream on, dream on … because there isn’t going to be a United Ireland!
At that event in New York in 2000 Gerry was so confident that he made a promise. He promised to shave off his beard if it didn’t happen. Well I have a little present for Gerry, because he is going to need it! The beard will be going because a United Ireland isn’t coming.'
Posted by Nelson McCausland MLA at 16:48