HMS Caroline, a First World War light cruiser, was built by Camell Laird in Birkenhead and launched and commissioned in 1914.  She is therefore the second oldest commissioned warship in the Royal Navy and saw action at the Battle of Jutland in 1916. 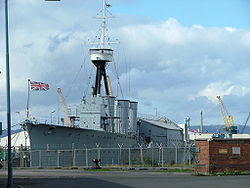 Caroline was placed on the reserve list in 1922 and in 1924 Sir James Craig had her transferred to Northern Ireland as headquarters for the newly formed Ulster Division of the Royal Naval Volunteer Reserve.  However her time as a commissioned ship is coming to an end and she will be formally decommissioned early next month.  She will then become the property of the newly created National Museum of the Royal Navy.  I had already visited the ship on 24 September but it was a privilege to be invited to the decommissioning dinner, which was held on the ship last night.
An informal group of stakeholders has been convened to consider the future of HMS Caroline - with representatives from DCAL, DSD, the Northern Ireland Tourist Board, Belfast Harbour Commissioners and Belfast City Council, as well as the Royal Navy, and there is a desire that she remain in Belfast permanently as a museum ship and part of our maritime heritage.  However this will be dependent on preparing a sustainable business plan.
The guest of honour at the dinner was Rear Admiral Martin Alabaster, Flag Officer for Scotland, Northern England and Northern Ireland and Flag Officer for the Reserve Forces, and it was interesting to meet several former members of the RNR, whom I have known down through the years without realising that they were actually members of the Reserve.  A message of loyal greeting had been sent by the Commanding Officer to the Queen and Her Majesty had sent a letter of congratulation to HMS Caroline after 85 years of unbroken service as the Ulster Division of the Royal Naval Reserve.
Posted by Nelson McCausland MLA at 02:19