Although I started the day at the Ulster Museum, this was a day that was dominated by football.
I visited the refurbished Ulster Museum shortly after it opened but wanted to get back on a day when it was less crowded and I took the opportunity this morning to have a walk around.  The crowds were smaller than on my previous visit but nevertheless the place was quite busy, mainly with family groups of parents and children. 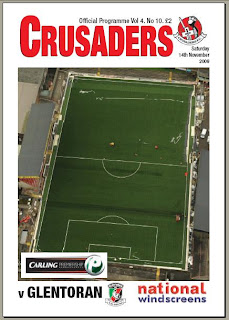 Later I went over to Seaview, the home of Crusaders Football Club, for the press launch of their new 4G pitch.  This was funded by my department through Sport NI and it was certainly money well spent.  The new pitch will mean that it is available throughout the week for use by Crusaders teams but also for use by Newington FC, another North Belfast team, as well as community-based and school teams.  Afterwards I stayed for the game against Glentoran and the result was a 1-1 draw, which was fair to both sides.
Meanwhile Crusaders and Newington FC  have exciting plans for a new football stadium on the North Foreshore and these were outlined on Thursday morning at a breakfast reception in the Lansdowne Hotel.

From Seaview it was over to Windsor Park for a friendly international against Serbia.  The visitors secured a 1-0 victory after a very entertaining game.
Posted by Nelson McCausland MLA at 13:45