In 2005 the BBC Today radio programme ran a poll to find Britain's favourite painting and more than a quarter of the votes went to JMW Turner's The Fighting Temeraire tugged to her last Berth to be broken up.  He painted it in 1838 and today it hangs in the National Gallery in London.   The Fighting Temeraire received 31,892 votes out of the 118,111 votes cast and it was the painting that emerged as Britain's favourite. 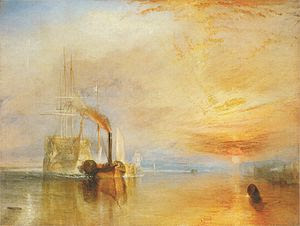 The Temeraire was built in the 1790s and fought at the Battle of Trafalgar in 1805.  It suffered considerable damage at Trafalgar but continued in service and then after some years as a prison ship and supplies depot it ended up in the Chatham Dockyard.  The painting depicts the ship being towed by a paddle steamer to its final berth to be broken up and it is a beautiful painting with a magnificent sunset, the ghostly relic of the Temeraire and the blackened tugboat in front of it.
The popularity of the painting is reflected in the recent publication of a new book, The Fighting Temeraire, by Dr Sam Willis, a maritime historian and archaeologist.  Reading a review of the book I was reminded that when I was 11 years old my parents bought me the Children's Britannica, a children's encyclopaedia with 12 volumes.  I was captivated by the information and also by the illustrations, which included a number of full colour reproductions of famous paintings.  One of them was The Fighting Temeraire and it was my favourite, all those years ago.  That was my introduction to art and an appreciation of art.
We must do all we can to ensure that young people growing up today have an opportunity, at an early age, to see beautiful art and we must do all we can to encourage an appreciation of art.
Posted by Nelson McCausland MLA at 03:09