Aitutaki is one of the Cook Islands, which lie in the South Pacific, and it is rarely mentioned in the media but a local dispute has brought a new media focus to the little island.
The introduction of Sunday air flights to Aitutaki has led to strong opposition from the residents of the island.  When the local airline decided to add a Sunday flight to its schedule it may have anticipated some opposition but it probably did not realise how strong the opposition would be.  There have been protests at the airport and about 1,300 people have signed a petition against the Sunday flights.  This is a remarkable figure as it represents almost the entire adult population of the island.
On the island of Aitutaki, Sunday is kept as a Christian Sabbath, a day for rest, worship and the family.  According to BBC reporter John Pickford, 'You cannot fail to be elated on a Sunday morning by the sight of a Polynesian congregation in its 'Sunday best'.'  The churches are packed, with the men mostly in black, the women wearing hats and girls in starched white frocks.  There is deep, soulful singing and the sermons are evangelical and evangelistic. 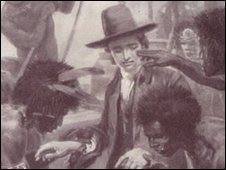 The island was discovered by Captain William Bligh in 1789, just 17 days before the 'mutiny on the Bounty', and Christianity reached it on 26 October 1821 with the arrival of John Williams, a Congregationalist missionary from the London Missionary Society.  Commenting on the impact of Christianity on the island, the leader of the campaign against the Sunday flights said, 'Before the missionaries we were always fighting each other. After they came there was no more trouble.'
After years of missionary work Williams was eventually killed in November 1839 by cannibals on the island of Erromango, part of the island-nation of Vanuatu, while attempting to bring the gospel to the island.  Earlier this month some of his descendants travelled to Erromango to accept the apologies of descendants of the cannibals in a ceremony of reconciliation.
William was an English missionary but Ulster has probably sent more evangelical missionaries around the world than any other place of a similar size.  This is an aspect of our heritage which is largely unrecognised, at least outside the world of evangelical Christianity.
Posted by Nelson McCausland MLA at 08:49