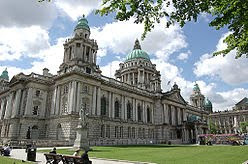 Belfast City Hall: An Architectural History is the title of a new book written by Dr Paul Larmour and published by the Ulster Architectural Heritage Society.

The publication of the book follows the restoration of the City Hall, which was completed in the autumn.  The book is thoroughly researched, well written, extremely informative and beautifully illustrated.  It describes the history and architecture of the City Hall from its inception in 1896 to its completion in 1906, as well as the changes and additions that have taken place since then.  The book has been produced with the support of Belfast City Council.

When Belfast was made a city in 1888, it was felt that the existing town hall in Victoria Street, built only thirty years earlier, was not sufficiently grand.  Belfast Corporation decided to build a civic building that would reflect the new city status.  The site of the old White Linen Hall was purchased in 1890 and work started in 1896.  The building was opened by the Lord Lieutenant, the Earl of Aberdeen, on 1 August 1906 and reflected the character of a confident and prosperous city, the principal city of the province of Ulster.

Posted by Nelson McCausland MLA at 05:28