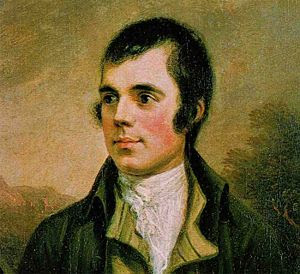 The forthcoming programme of the Linen Hall Library includes an exhibition of Burns and Burnsiana, which runs from Monday 25 January to Saturday 20 March.
The key item will be the 1787 Belfast edition of Robert Burns' first collection of poems, which was the first to be published outside Scotland. This was a reprint of the first Kilmarnock edition of July 1786. Some of the poems were reprinted in the Belfast Newsletter just three months later and then the entire volume was republished by James Magee of Belfast.
The programme also includes two lunchtime talks on Burns. John Erskine is to speak about The Ayrshire Ploughman on Monday 25 January at 1.00 and Frank Ferguson will speak about The Special and Not So Special Relationships of Robert Burns and Ulster Poets on Wednesday 27 January at 1.00.
Robert Burns was born on 25 January 1759 and it is therefore appropriate that the exhibition opens on 25 January, the anniversary of his birth.
The library has a magnificent collection of Burns and Burnsiana, mainly the Gibson collection, which was collected by Andrew Gibson, a native of Ayrshire, a governor of the library, and president of the Belfast Scottish Association. The Gibson collection, which comprised over 2,000 volumes, was purchased by public subscription in 1901 and placed in the library. Later this was augmented with materials that had belonged to Burns granddaughter, Eliza Everitt, who had lived in Belfast.
It is not surprising that there was such interest in Burns in Belfast. A French royalist émigré who wrote about his travels through Ireland in the year of Burns’ death in 1796 said, 'Belfast has almost entirely the look of a Scotch town, and the character of its inhabitants has considerable resemblance to that of the people of Glasgow. The way of speaking and even of dressing is much more Scotch than Irish.'
Posted by Nelson McCausland MLA at 13:54