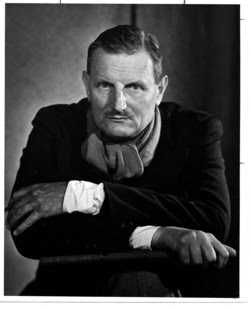 This morning I came across a map of the Tyrone Guthrie Centre at Annaghmakeerig House near Newbliss in county Monaghan.  The centre is based in the former family home of the theatrical director Tyrone Guthrie (1900-1971), who was born in England but had roots in Ireland and Scotland.
His father Dr Thomas Guthrie was a grandson of the famous Scottish Presbyterian Rev Dr Thomas Guthrie (1803-1873), one of the founders of the Free Church of Scotland.  An earlier ancestor, Rev William Guthrie (1620-1665) was a Covenanter who prepared for the ministry under Samuel Rutherford.
Tyrone Guthrie's mother Norah Power was the daughter of Sir William James Tyrone Power, Commissary-General-in-chief of the British Army in Ireland from 1863 to 1869 and Martha Moorhead, daughter of Dr John Moorhead of Annaghmakerrig House.  The Moorhead family bought the property in 1802 and William and Martha were married in 1859.
His great-grandfather was the Irish actor Tyrone Power (1795-1841) and the Holywood actor Tyrone Power (1914-1958) was his cousin.
I was surprised to see on the map of the estate, just south of Annaghmakerrig Lough, two Ulster-Scots place-names - Bob's Brae and The Black Pad.  Both brae and pad are Ulster-Scots words and they are a reminder of the settlement of Ulster-Scots in this part of the province of Ulster.  A brae is a hill or hillside and a pad is a path or track
Posted by Nelson McCausland MLA at 11:35