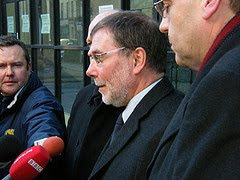 Along with David Simpson MP MLA and Stephen Moutray MLA I met with the Parades Commission yesterday to discuss the Drumcree parade in county Armagh.  It was a useful meeting, which lasted around an hour, and we were able to question them about their approach to the situation whereby dissident republican Brendan McKenna, has refused to engage with the Orangemen.  Sadly the Parades Commission has rewarded such intransigence.

The commissioners undertook to consider the issues we raised and we will seek a further meeting with them in due course.

Brendan McKenna was jailed for six years for his involvement in blowing up the Royal British Legion Hall in Portadown in 1982.  He served on Craigavon Council from 1997 to 2001 and was for some time an adviser to Sinn Fein MLAs.  Eventually he left Sinn Fein and he was elected general secretary of Eirigi in May 2009.
Posted by Nelson McCausland MLA at 13:57