Last weekend, back in Ulster, there was a Republican Youth weekend in Strabane to mark the 25th anniversary of three IRA terorrists who were killed by the SAS.  The weekend began on Friday night in rather unrevolutionary fashion with a dinner dance but this was no ordinary dinner dance.  It was organised by Strabane Republican Flute Band.  On Saturday morning there was a republican tour of West Tyrone and then it was on to the Fountain Street community centre in Strabane for an exhibition about the three terrorists. 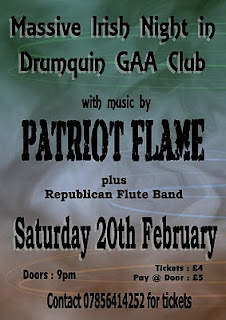 As part of the commemorative weekend there was a social event in Drumquin GAA Clubrooms on the Saturday evening.  These are the clubrooms of the Wolfe Tone's GAA Club and it is regrettable that a sport club is used to celebrate the memory of IRA terrorists.