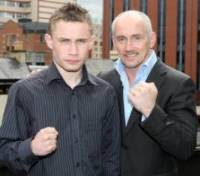 Congratulations to North Belfast boxer Carl Frampton who defeated Yohan Boyeaux in a super-bantamweight bout at York Hall in London last night.  Frampton, who is from Tiger's Bay, has had a great start to his professional career with a series of victories.

He started boxing at an early age and his first competitive bout was at the age of seven in Crusaders FC Social Club.  His amateur career started with the Midland Boxing Club and it ran to 130 bouts with 110 wins.  He won the Irish senior flyweight title in 2005, a silver medal at the 2007 European Union championships, and the 2009 Irish senior featherweight title.

Frampton has now turned professional and his manager Barry McGuigan is convinced that he can become a world chamption.
Posted by Nelson McCausland MLA at 05:42