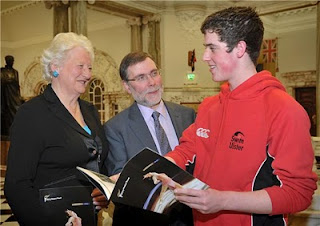 Sports Minister Nelson McCausland and Dame Mary Peters
talk to Ulster Senior Record holding swimmer Jordan Sloan, from Bangor
The Ulster sports and Recreation Trust was founded as a charity in 1975 to commemorate the success of Dame Mary Peters in the 1972 Olympic Games.  In 2008 the trustees decided to rename it the Mary Peters Trust in honour of their president, Dame Mary, and thereby recognise her service and contribution to the life of Northern Ireland and further afield.
The trust distributes grants to young people to help towards the cost of expenses in respect of preparation, training and competition in sport and over 160 awards totalling more than £60,000 have been distributed in this year.  You can get more information at http://www.marypeterstrust.org/
Last night I attended the launch of the annual report of the Mary Peters Trust, which was held in Belfast City Hall, and met a number of the young people who have received support from the trust.  There was a very large attendance and it was clear that the trust has made a real difference through the support it has given to the young athletes.
Posted by Nelson McCausland MLA at 23:50