Multi-media and music at SouthxSouthwest

I have spent the past week in Austin, Texas, at the South x Southwest Festival where people from Ulster were highlighted at both the multimedia and the music sections.
At one time our economy was built on heavy industry and farming and at the start of the 20th century we had the biggest shipyards in the world, as well as the largest linen mills.  However the days of heavy industry are over and we need to look at new areas for economic growth.  There is no doubt that one of these is the creative industries - film, multi-media and music - and two government departments, DCAL and DETI, have an important role to play in supporting and promoting them. 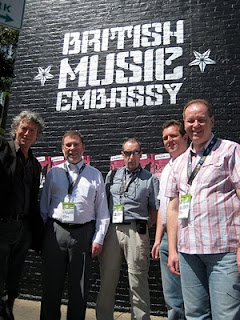 South x Southwest draws participants from around the world and is the major international opportunity for people in the multi-media and music to showcase their product and services.  The young folk in the multi-media sector were all very pleased at the contacts they were able to make.  There are about 400 people employed in the sector in Northern Ireland, most of them young and most of them in small businesses of just a few people, but they are very gifted and there is no reason why the sector cannot experience very substantial growth in the next few years.
Local musicians performed at the 'British Music Embassy' and the sound level was such that no one can have failed to notice them.
There was support from the Arts Council and Belfast City Council to bring the participants out to Austin and I am confident this will bring real benefits through increased business for Ulster companies.

I also met with Texas government officials, including the Texas secretary of state, and officials from the cultural sections of Austin Council. We made some valuable contacts and were able to see how they promote culture and arts.

Posted by Nelson McCausland MLA at 09:01