This afternoon I visited Ballymena Showgrounds, which is owned by Ballymena Borough Council and is the home venue for Ballymena United Football club.  This is one of 30 sports grounds designated last December as requiring a safety certificate under the Safety of Sports Grounds (NI) Order. 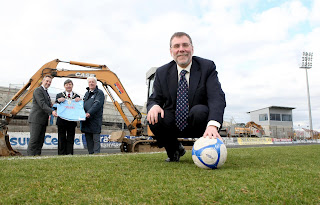 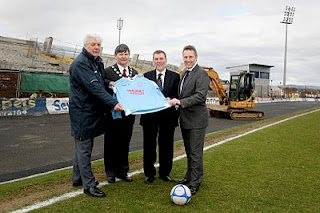 Robert Cupples (chairman), Cllr James Currie (mayor), Nelson McCausland MLA & Ian Paisley Jnr MLA
The council and club have been working hard to improve the Showgrounds and to address safety issues.  Between 1997 and 2006, Sport NI made awards totalling £752,000, mainly towards safety improvements at the ground, and in July 2008 an offer of £205,000 was made under the Soccer Strategy Playing Facilities Programme.  This work should be completed within this financial year.
A further award of £808,000 was made under the Stadia Safety Programme to provide a new stand and this work is due to be completed by August.