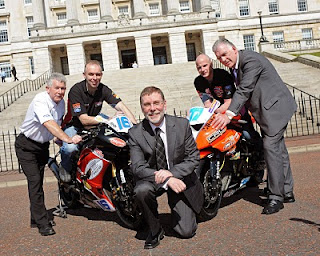 At Stormont today we had the launch of a new Armoy and Kells Cross Border Motor Cyle Championship, which is a partnership between the clubs at Army in Northern Ireland and Kells in the Republic of Ireland.

Thi is a new conceptr for motorsport in Northern Ireland with the two rounds of the championshp split between the two circuits on two different dates.

We all know the road racing traditions of Armoy and the legendary Armoy Armada and last year saw the inaugural Armoy Road Race event.  One year on there is a new championship event which will undoubtedly grow into a major annual sporting occasion.
Posted by Nelson McCausland MLA at 08:27