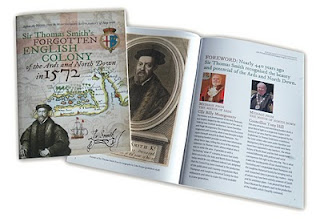 A new booklet about Sir Thomas Smith's Forgotten English Colony of the Ards and North Down in 1572 was launched in the Londonderry Room in the Old Town Hall in Newtownards on Friday evening.
The booklet, which was researched and written by Mark Thompson and published by Loughries Historical Society, helps to explain the background to the subsequent settlement by Hamilton and Montgomery, 'the founding fathers of the Ulster-Scots', in 1606.
The Londonderry Room was filled to capacity for the launch and we were entertained with music from Keith Lyttle and Matthew Warwick.  Mark himself spoke, with the aid of a powerpoint presentation, about the Thomas Smith story, and I was invited to make a few impromptu remarks at the end.
I commended Mark Thompson for uncovering and recovering both the Hamilton and Montgomery settlement and the earlier attempted colonisation by Sir Thomas Smith.  Too much of our history is forgotten or misrepresented and there is important work to be done in recovering the 'lost stories' of Ulster history but such work must be credible, authentic and historically accurate.
This new booklet is of a very high quality as regards both the content and the presentation and deserves a strong commendation.  Copies can be obtained from the Loughries Historical Society and they can be contacted at hmanderson64@btinternet.com
Posted by Nelson McCausland MLA at 16:11