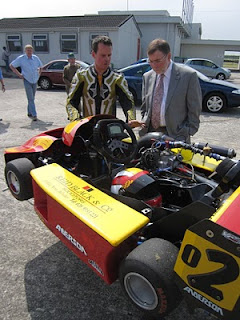 Kart racer Liam Fox explains the workings of his machine to Sports Minister Nelson McCausland. The 2010 British Superkart Championship came to the Bishopscourt circuit in Co Down at the weekend.
Today I visited the Bishopscourt Race Circuit in county Down for the 2010 British Superkart Championship.  The two day event (4 & 5 June) consists of rounds of the North of Ireland Karting Association Championship, rounds of the British Superkart Association long Circuit Championship and the prestigious UK Cup Race for all Superkarts.
Superkarts are ultra light fast karts with aerodynamic bodywork, disc brakes and a fully race tuned 250cc 2-stroke motorbike engine.  Depending on the venue they can reach speeds of 120 to 150 mph.
I was interested to learn that there are junior classes, with young people able to start at the age of eight, and I met all the young competitors.  There were also several female racers competing against the men.
The competition attracted competitors from across England, Scotland and the Republic of Ireland as well as Northern Ireland.  I received a warm welcome and it was a thoroughly enjoyable visit to Bishopscourt.  This is a sport which does not receive the public recognition it deserves. 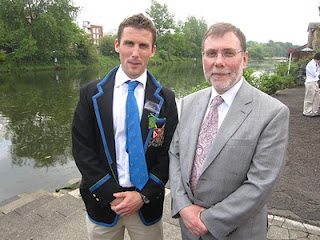 Jonathan Baird  Lady Victoria Boat Club) with Sports Minister Nelson McCausland at the Annual University Boat Race on the River Lagan. Jonathan is a Queen's Rowing alumnus and was a rower in the first team to take part in the race in 2004.
From there I returned to Belfast for the 2010 University Boat Race between Queen's University Belfast and Trinity College Dublin.  This was the seventh annual race and it is held over a distance of 2112 metres, which was the original Oxford Cambridge course distance.  The Queen's rowing club is called the Lady Victoria Boat Club, since the university was founded in the reign of Queen Victoria, and the Trinity club is called the Lady Elizabeth since Trinity was founded in the reign of Queen Elizabeth I.
I followed the Fresher Women's Race in a launch, which is a great way to see the race.  It also provided a good sense of the recreational potential of the Lagan.
Posted by Nelson McCausland MLA at 15:53