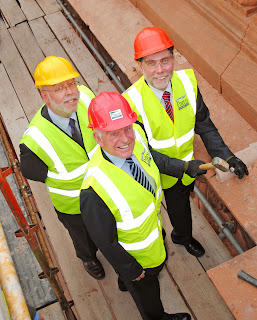 Desi Miskelly, Assets Manager with Libraries NI , David Patton, chairperson of the Patton Group,
who are carrying out the repairs, and Nelson McCausland
Earlier this week I visited Belfast Central Library to see the important stonework repairs being carried out to the façade of the historic building.  Libraries NI initiated the repair works to address weather damage to the landmark grade B listed building's stonework and roof. Work is expected to be completed by the end of 2010.
The Northern Ireland Executive has committed nearly £850,000 to these restoration works in recognition of the significant role that Belfast Central Library plays in the cultural life of Northern Ireland. This work will ensure the safety of the public and also ensure that this iconic building is preserved for the benefit and enjoyment of future generations. The library is also a key part of the regeneration of the historic North West quadrant of the city.
I was accompanied on his tour of the building by Billy Martin, chairman of H&J Martin, the building firm that originally constructed the library, and a descendant of the original Martin family, and David Patton, chairman of the Patton Group, who are carrying out the repairs.
The skill of the craftsmen is remakrable as is the care that is taken in plannign the work and procuring the best materials.  The builsing was constructed of sandstone from Dumfries in Scotland and stone from the same quarry is being used in the repair work to ensure that it matches the original.
I have spent many hours in the library but this was my first opportunity to get up on to the roof and see the building from above.
Posted by Nelson McCausland MLA at 01:51