Topping out ceremony at Lyric

The 'topping out' ceremony at the new Lyric Theatre took place this afternoon in south Belfast.  The new theatre will cost almost £18m of which my department has contributed £9m and the Lyric has raised over £5m. 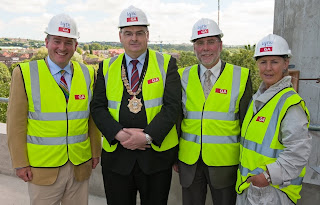 Work started in March 2009 and good progress is being made with an anticipated completion date in March 2011.  The new theatre will bring benefits in terms of cultural, physical, social and economic regeneration as well as cultural tourism
This is one of a number of major cultural projects and others include the refurbishment and extension of the Crescent Arts Centre in Belfast, the new Metropolitan Arts Centre, also in Belfast, and the Waterside Theatre, Playhouse Theatre and An Gaelaras in Londonderry.
Posted by Nelson McCausland MLA at 10:47