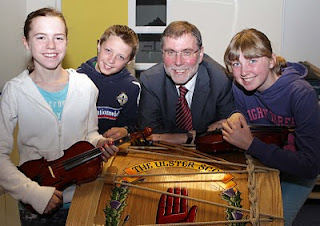 Sixty children are attending the Loughries Historical Society Summer Scheme which runs throughout this week in Castle Gardens Primary School in Newtownards.  They are full to capacity and the demand was greater than the number of places.  This is one of about 30 summer scheme supported by the Ulster-Scots Agency, with most of them in Northern Ireland and a few across the border in Cavan, Monaghan and Donegal. 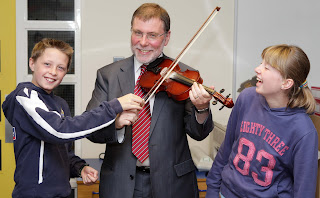 There is good co-operation between the society and the school and indeed the school is to the fore in bringing Ulster-Scots culture into the classroom.  There are some people who say there is no demand for Ulster-Scots in schools but summer schemes such as this show that there is a genuine demand.
I was impressed by the tuition in music and dance and it was good to see the boys participating in the country dances.  The children learning the fiddle did a good job on the old tune The Star of the County Down and certainly had our feet tapping. 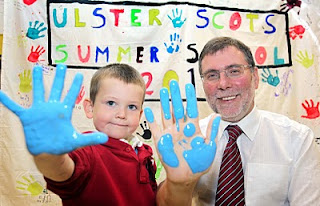 It was encouraging to hear that the summer scheme has received some support from Ards Borough Council as well as the funding from the Agency but of course nothign could happen without the team of dedicated volunteers.
Posted by Nelson McCausland MLA at 06:06