His Eye Is On The Sparrow

This afternoon I was listening to Radio Foyle's excellent gospel music programme Rejoice, which is hosted by James McClelland.  He played a version of the song His Eye Is On the Sparrow and suggested that it was an old negro spiritual.  The song has been sung by many African-American gospel singers but in fact it is not a negro spiritual.
I discovered the story of this gospel song some time ago after purchasing a CD by the American singer Lynda Randle.  By the way I first heard Lynda Randle on Rejoice and then later heard her singing in the Odyssey in Belfast.

The song was written back in 1905 by Civilla D Martin (1866-1948) and was inspired by a conversation that Civilla Martin and her husband Walter, a Baptist pastor, had with a Christian couple, Mr and Mrs Doolittle, in Elmira, New York.

Mr Doolittle was disabled and yet in spite of their afflictions the couple showed a deep Christian joy. Walter Martin asked them the secret of their joy and the woman replied, ‘His eye is on the sparrow and I know He watches me.’ That answer was probably inspired by some words of Jesus in Matthew 6:26 and Matthew 10:29-31. When Civilla went home she wrote the words of the song and the next day she mailed it to Charles H Gabriel (1856-1932) who wrote the tune.

The song is particularly associated with the American singer and actress Ethel Waters (1896-1977), who was born in Chester, Pennsylvania, on 31 October 1896 after her mother was raped at knifepoint at the age of thirteen. Ethel grew up in a violent, impoverished home and she married at the age of thirteen but had to leave her husband, who was abusive to her. At the age of seventeen she became a professional singer and in 1921 she produced her first record. 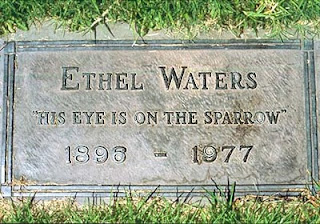 After a career as a blues and jazz singer, spanning thirty years, she wrote her autobiography in 1951. In her performances she often sang the song His Eye is on the Sparrow and she took the title of the song as the title of the book.  Ethel was converted through the preaching of the American evangelist Billy Graham and in her later years she sang at many of his campaigns.  The words were indeed her testimony of her faith in Christ.
Posted by Nelson McCausland MLA at 11:53