A good week for sport

It's been a good week for sport with Ulster golfers to the fore in the Ryder Cup victory, two medals so far for Northern Ireland in the Commonwealth Games, a good point against Italy at Windsor Park and another win for Ulster at Ravenhill. 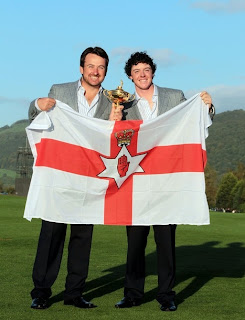 Graeme McDowell (Portrush) & Rory McIlroy (Holywood) celebrating the Ryder Cup victory
On Monday Greame McDowell sank a 5 foot putt on the 17th green to give victory to Europe in the Ryder Cup. 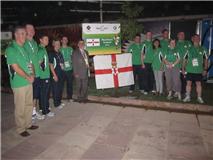 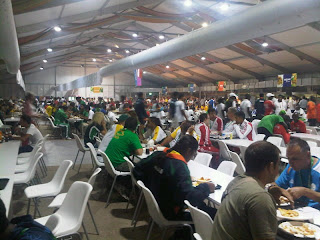 The catering tent in the athletes village
I visited Delhi for the first few days of the Commonwealth Games and met many of the members of the Northern Ireland team in the athletes village as well as seeing some of them in action.  Their accommodation was basic but was much better than I had expected from some of the newspaper reports.  The catering facilities in the centre of the village face a real challenge with the task of providing food for so many athletes from so many different countries and the need to accommodate British, African and Eastern tastes in food.

There was a packed Windsor Park last night for the match against Italy in the Euro 2012 Qualifiers. Some interim work was done on the ground over the summer to ensure that international games continue to be played in Northern Ireland and there were 15,600 people there for the game.  There were no goals but Northern Ireland came away with a valuable point.  This follows on the 1-0 victory over Slovenia in the first Group C match, when Corry Evans scored the winning goal.

Meanwhile in rugby, Ulster got off to a good start in the Heineken Cup with a 30-6 win over Alroni at Ravenhill.
Posted by Nelson McCausland MLA at 06:46