The main Act of Remembrance in Belfast is on Remembrance Sunday, which is 14 November this year, but each year some people who are working in the city centre or out shopping gather informally at the Cenotaph in the grounds of Belfast City Hall at 11.00 am on Armistice Day, 11 November.  This is the actual anniversary of the end of World War I. 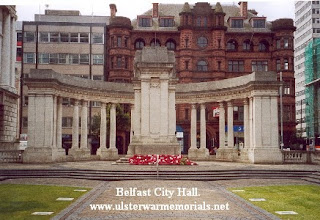 They stop the normal activities of the day and gather for a few minutes at the Cenotaph to remember whose who died in two World Wars and other conflicts.
Last year several people approached me at the Cenotaph on Armistice Day and said that it would be helpful to have something organised so that there was a formal Act of Remembrance rather than just an informal gathering.
In response to their suggestion I raised this in Belfast City Council and the Royal British Legion has agreed to organise a brief Act of Remembrance at the Cenotaph at 11.00 am on Thursday 11 November.
If you are working in the city centre or out shopping on Thursday morning I would encourage you to come along to the Cenotaph for those few minutes to reflect on the service and sacrifice of those who died.  Perhaps you could also pass this information and invitation on to others.
Posted by Nelson McCausland MLA at 05:41