With God on our Side

On Armistice Day 11 November the film With God on Our Side was shown in a room at Stormont. According to the American director of the film, Porter Speakman Jr, it is a critique of the theology of Christian Zionism.
The following report was taken from the website of Rev Stephen Sizer, who is a Church of England minister and vicar of Christ Church, Virginia Water. He promotes the film and its stance and he is the person on the right of the photograph, which shows some of the people at the film showing. 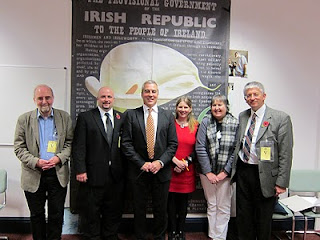 Yesterday on Remembrance Day, the film With God on our Side was shown to an invited audience at Stormont, home of the Northern Ireland Assembly. Those present represented the spectrum of political opinion and religious tradition that make up Northern Ireland. All present were impressed with the film and the question time had to be extended afterwards.

On the day we remember with great respect, the dead from two World Wars as well as the 50 or more regional wars since 1945, in which allied servicemen and women have made the ultimate sacrifice in the service of mankind, it was most appropriate to be showing the film at Stormont.
In With God on our Side we meet Jews, Moslems and Christians who have disavowed racism, ethnic cleansing and violence as a means of resolving conflict, but instead are working for justice, peace and reconciliation for all who live in the Middle East.

The event was indeed held at Stormont but it was not held in any of the public rooms. As the photograph shows it took place in a party room belonging to Sinn Fein.
Sizer and Speakman are entitled to their views on Christian Zionism but is there not something inappropriate about asking Sinn Fein to host a film about Israel?  During the Second World War, while the Nazis were persecuting Jews in Europe, the IRA allied themselves with the Nazis.  They saw Britain's difficulty as their opportunity and ignored the record of the Nazi regime.  Stephen Sizer seems to be remarkably naive and ill-informed.

His blog gives the impression that this was in some way an 'official' showing associated in some way with the Northern Ireland Assembly.  In fact it was not - it was just a private event sponsored by Sinn Fein.
Posted by Nelson McCausland MLA at 09:58