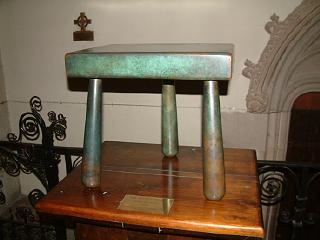 There are certainly three main traditional influences which have shaped Ulster - English, Irish and Scottish -and they have left all their imprint on our cultural landcape.  We also have an Orange cultural tradition, with its colourful regalia, the pageantry of its parades, the artistry of the banners, the music of the bands and a heritage of Orange song and poetry.
This diversity is one of the things that makes Northern Ireland such a unique and distinctive place and the diversity, along with its component cultures, should be recognised, valued and celebrated.

In more recent years we have seen the arrival in Northern Ireland of new communities from abroad and they have brought their own cultures with them  These communities have added to our diversity but their numbers are still comparatively small and the indigenous cultural traditions mentioned above are still the cultural traditions of the vast majority of people in Northern Ireland.  One has only to consider the numbers of people who watch Gaelic games or Orange delebrations to realise that this is still the case.
Secondly, these cultural traditions should be treated with equity and fairness. We cannot have a situation where special and preferential treatment is given to one tradition over another.  That would be inequitable and unfair.  Moreover that principle of cultural equity has to be applied in several important areas - recognition, respect, resources and representation.  The road to cultural equity will be a long road but that is not an excuse for day.  Equity delayed is equity denied.
Thirdly, we must recognise that there is an interdependence between cultural traditions.  They interact with each other, they impact on each other, they borrow from each other, and they influence each other.  For example, the Ulster-Scots word crack was borrowed into Irish and respelt as craic because there is no letter k in the Gaelic alphabet.
Staying with language, both the Irish language and the Ulster-Scots language, which are our regional minority languages, have influenced each and every one of us.  They have both provided words for the Ulster dialect that we speak every day and they have both contributed to the placenames that are all around us.  Ulster-Scots has had a greater influence on dialect and Irish has had a greater influence on placenames but both have contributed to our dialect and our placenames and both languages are part of our cultural wealth.

A better and wider understanding of that interdependence can do much to build social cohesion in our society and promote good relations.  For that reason our cultural sector should look at opportunities to reflect our cultural interdependence.
We need to find ways to celebrate and showcase our diversity in a way that contributes to community cohesion and there are certainly opportunities to do so.  Some time ago I attended a concert in the old Crumlin Road Gaol in North Belfast.  It was organised through the North Belfast Partnership and included a section by an excellent Irish traditional music group, followed by an Ulster-Scots traditional music group.  They were followed b ya group of ethnic musicians and at the finale the Ulster-Scots and Irish musicians and dancers performed together.  Another good example was a performance by some Protestant boys from a controlled secondary school in Belfast, playing the lambeg and fifes, along with an Irish traditional music group from a Roman Catholic boys' school.

We often speak about cultural communities, such as the Orange community, the Ulster-Scots community or the Irish language community but we also want to see an overarching Northern Ireland community.  This is about community cohesion and sharing.

In developing our cultural life in Ulster we must ensure that a 'shared and better future' remains a priority and it must be more than just a vague concept, which is why the 'equity, diversity and interdependence' model is so valuable.
On visits to a folk museum you can often see a little three-legged stool beside an open hearth fire.  The stool is called a creepie and it is very steady, even on an uneven floor, because the three legs are all the same length.  A two-legged stool will not stand up and a stool where one leg is much longer than the others will be of little use.  In the same way there are three legs to a 'shared and better future' and they are all essential.  No one of them has priority over another and all three of them are necessary.  It may be a very simple and hamely illustration but the point it makes is important.
Posted by Nelson McCausland MLA at 04:10