Burns Clubs in Londonderry and Larne 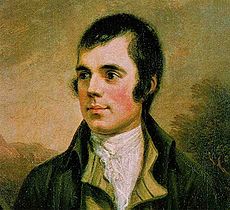 Tonight the memory of the Scottish poet Robert Burns will be celebrated in many parts of Ulster.  The awareness of Burns is greater now than it was some years ago and yet there is only one Burns Club in Ulster and that is the Belfast Burns Association.
However at one time there were Burns clubs in other parts of Ulster, including Londonderry and Larne.  In the course of general reading I came across these references which confirm the existence of the clubs.
There was a Londonderry Burns Club and Caledonian Society and it endowed a Burns cot in the City and County Hospital in Londonderry in 1929.  There is a reference to this in Altnagelvin’s Thirty Glorious Years by Cahal Dallat and a photograph of the Duchess of Abercorn at the Robert Burns bed.
At one time there was also a Larne Burns Club and one of those associated with it was the Glenarm poet Dr William Clarke Robinson, who died on 3 January 1932.  The February 1932 issue of The Glensman carried an article on Dr Robinson and recalled: 'In Larne he will be long remembered as a delightful expositor of Burns, his recitations of ‘Tam o’ Shanter’ and other poems being always eagerly looked forward to whilst more than once he delivered the oration at the annual dinner of the Larne Burns Club.'
However it seems that the earliest Burns Club in Ulster was in Belfast.  A Belfast Burns Club in 1872 but this was reorganised in 1886, one year after the formation of the Federation of Burns Clubs, which had been set up in 1885.  This world-wide organisation has had well over 1,000 clubs on its roll and the Belfast Burns Association is number 15.  It was formed by members of the Belfast Benevolent Society of St Andrew, which had been established in 1867.
Bruns had a profound influence in Ulster and he was central to the Ulster, and particularly to the Ulster-Scots, literary tradition.  The novelist Benedict Kiely, who was born in Tyrone in 1919, said:

Burns became a popular folk-author in Ulster, Catholic and Protestant, as he never was or could have been in any other part of Ireland.  He still remained so in my boyhood: and I recall the local ragged rhymster sayign to me, with a seriousness at which it was not possible to laugh, that: 'Burns was the best of us.'