Theatre to mark 400th anniversary of the Authorised Version

This year is the 400th anniversary of the Authorised Version of the Bible.  Work on the translation began in 1604, at the request of King James I of England, and carried on until 1611.  A team of forty-seven of the best Bible scholars of the day worked on translating the text into English and it is believed to be the best selling book ever produced.
The occasion is to be marked in various ways, including the production of commemorative stamps by Royal Mail. 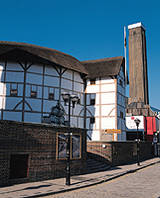 I was also glad to see that the Globe Theatre in London will host a cover-to-cover reading of the text.  It has been said that it will be a rare opportunity to 'experience one of the most significant pieces of world literature in its entirety'.  The readings will happen between Palm Sunday 17 April and Easter Monday 25 April and it is estimated that they will take 69 hours.
The Globe Theatre opened in 1997 and is a modern reconstruction of Shakespeare's Globe Theatre, which was built in 1599.  The new theatre stands just a short distance from the site of the original Globe.
I wonder if any of our local theatres and cultural institutions in Northern Ireland are planning to mark the 400th aniversary of a translation which has had such a profound influence on our language as well as on the spiritual life of the British Isles and many other lands.  There is a special affection for the Authorised Version among many folk in Ulster and here is a great opportunity for cultural institutions and venues to reach out to the evangelical community.
Posted by Nelson McCausland MLA at 16:41