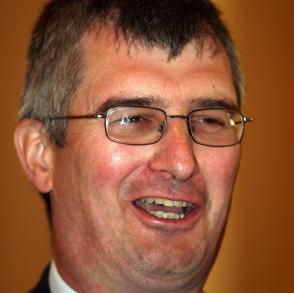 The Ulster Unionist Party fought the Westminister election in partnership with the Conservative Party, under the title Ulster Conservatives and Unionists New Force (UCUNF), but the partnership plan devised by Reg Empey and David Trimble is disintegrating by the day.
Back in December UUP leader Tom Elliott said that he was about to hold talks with the Conservatives and wanted his party to be the local 'franchise' of the Conservative Party.
However Tom's 'franchise' proposal has been rejected by the Conservatives.  They have announced that they are setting up a campaign office in Bangor and will oppose the UUP in the Northern Ireland council elections in May.  Not surprisingly that announcement has drawn criticism from the UUP.
Meanwhile Irwin Armstrong, the former chairman of the Conservative Party in Northern Ireland, who resigned in December because the Tories would not be fielding Assembly candidates, is to return to the fold, in spite of the fact that they are still not fielding Assembly candidates!  Armstrong stood unsucessfully as a UCUNF candidate in North Antrim in the Westminster election last year and described the fielding of a joint unionist candidate in Fermanagh and South Tyrone as 'a sectarian carve-up'!
At the same time, In an interview on the BBC programme Hearts and Minds, the Conservative Secretary of State Owen Paterson said that the election of Martin McGuinness as First Minister 'would be an extraordinary endorsement of the progress that has been made.'  'I don't think it would be appropriate for a new coalition government to change things round.'
This was said in response to questions from Noel Thompson as to why he had refused to change the rules on the election of First Minister after requests from the UUP.  The main selling point of the UCUNF strategy was that it was supposed to afford the UUP influence with the Conservatives but that influence seems to have evaporated, if indeed it ever existed at all.
The bizarre comment from Owen Paterson provoked David McNarry of the UUP to say that Paterson should 'consider his position as Secretary of State' and also 'consider his professed unionism'.  The Belfast Telegraph reported this under the headline 'Tory chief should go: UUP' with the sub-title 'Rift between parties deepens after call to Paterson'.

The story seems to be getting 'curiouser and curiouser' by the day and must be deeply debilitating for the UUP.

Posted by Nelson McCausland MLA at 18:16