Gerry McGeough and the AOH 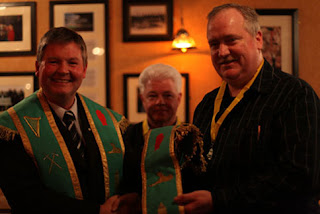 The Ancient Order of Hibernians is a fraternal orgnaisations that is open to people who are Roman Catholics and Irtish nationalists.  It is generally an organisation that draws little attention but recently it has been mentioned in a number of newspapers.

In the photograph above, Gerry McGeough, President of the Tyrone County Board of the Ancient Order of Hibernians, makes a presentation to Seán Pender, Chairman of the American AOH Freedom For All Ireland committee  The event took place in Omagh on 1 February 2011 and the person in the centre of the photograph was Jere E. Cole, National Director of the American A.O.H.  McGeough had been elected president of the AOH in Tyrone the previous month.

The photograph was taken just a few weeks before McGeough was convicted of IRA membership in 1975 and the attempted murder of DUP councillor Sammy Brush in 1981.  In fact McGeough had been elected president during the time of his trial.  Members of the AOH in Tyrone chose as their president a man who was on trial for IRA membership and murder!

As well as being a convicted IRA terrorist, McGeough is a 'traditionalist Roman Catholic' who attempted to use the AOH to promote his ideology.

In 2006 advertisements appeared in newspapers in rural areas of the Irish Republic and the border counties for those interested in joining a revitalised AOH which would focus on the promotion of so-called 'Hibernian' values.  McGeough said that a significant number of people associated with his brand of extreme Roman Catholicism had been recruited into existing AOH dicisions and that new divisions had been formed in Dublin and other areas.

In May 2006, McGeough, as editor, and Charles Byrne, a 28-year-old from Drogheda, launched a monthly magazine called The Hibernian, dedicated to “Faith, Family and Country”. The magazine, which was professionally produced, had prayers and pictures of the Virgin Mary, as well as articles espousing the views of Fr Denis Fahey and others promoting the Society of St Pius X.  Twenty-nine issues of The Hibernian were published between May 2006 and September 2008, when it ceased publication due to the bail conditions imposed on McGeough.

There are certain similarities between Gerry McGeough and Sean South in that both were IRA terrorists and both were religious extermists, sympathetic to the far-right ideology of Fr Denis Fahey.

The fact that the AOH in Tyrone elected McGeough as their president has attracted very little attention in the media.  I wonder what the reaction of the media would have been if the Orange Order had elected someone as a County Grand Master, a post that is similar to that held by McGeough, when the person was standing trial for murder!
Posted by Nelson McCausland MLA at 18:56