Rev David Frazer is a Church of Ireland minister and a member of Sinn Fein.  Back on 1 January he posted on his Facebook wall the Wolfe Tones singing the republican song Sean South.  He also posted the comment: 'In memory of Sean South and Fergal O'Hanlon and all those who laid down their lives in the cause of Irish freedom.'

For the benefit of those who may not know, it may be useful to recall exactly who Sean South was and the type of man that David Frazer was eulogising.
On 1 January 1957 fourteen IRA men mounted an attack on Brookeborough police station in county Fermanagh.  They were well armed but the attack failed and two of the IRA men were killed, Sean South and Fergal O'Hanlon.  Their bodies were taken across the border into the Republic and there followed what J Bowyer Bell describes as 'a week of all but national mourning'.

Vast crowds lined the route of South's funeral cortege to Dublin and many local authorities passed resolutions of sympathy with the families of the two dead IRA terrorists.  At midnight on 4 January, twenty thousand people including the mayor, waited in Limerick for the hearse and the next day fifty thousand people attended the funeral.  The song Sean South appeared in the Irish Catholic, a weekly Roman Catholic paper, within a week of his death.  Sean South became the most famous IRA figure of the 1956-62 campaign and as Dr Pat Walsh comments:

South was the very embodiment of the Catholic-nationalist ideal, a Gaelic scholar, a fervent Catholic, a nationalist writer, an officer in the FCA (the part time section of the Free State Army) and IRA volunteer.  [Irish Republicanism and Socialism  p 42]

The Belfast Telegraph (8 January 1957) reported that two local authorities in Eire, Dublin City Council and South Tipperary County Council, passed votes of sympathy with relatives of the two dead terrorists.  In Dublin Con Lehane, speaking in Gaelic, proposed: 'That we salute the memory of Sean South and Fergal O'Hanlon, who gave their lives for Irish Freedom.'
Sean South was deeply religious, a former member of the Legion of Mary and Maria Duce (Mary our Leader), an ultra-right wing Roman Catholic organisation led by Fr Denis Fahey of the Holy Ghost Order in Dublin.  South established the Limerick branch of Maria Duce and between August 1954 and January 1956 he published a whole series of articles promoting Maria Duce teaching in the Gaelic League monthly newspaper Rosc. 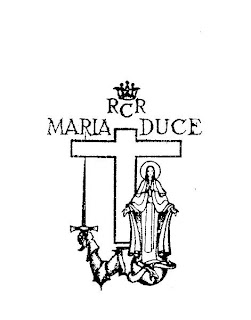 Fr Denis Fahey was closely involved with Fr Edward Cahill's An Rioghacht study group and wrote a number of books including The Rulers of Russia (1938) in which he argued that communism was a conspiracy organised by Judaism and Freemasonry.  Following the death of Cahill in 1941, An Rioghacht became more moderate and so in 1945 Fahey founded the organisation Maria Duce, whch was stridently anti-Protestant and anti-Semitic.
The position of Maria Duce was set out by its secretary J P Ryan, in a statement in the Irish Times of 7 March 1950.  In this he stated, 'What then must be the attitude of Catholic States, sych as Spain and Ireland, towards Protestantism and non-Catholic sects in general?  The ideal (as outlined in the Syllabus of Pius XI, Ubi Arcano and Quas Primas of Pius XI) is that the Catholic State ... should not only not connive at the proselytism of non-Catholic sects, but should suppress them as inimical to the common good.  Such intolerance of error is the privilege of truth.'
We know then that Sean South was an IRA terrorist but he was also a member of an extremist society, Maria Duce, that was both anti-Protestant and anti-Semitic.  Republicans who commemorate Sean South try to ignore such things as his anti-Semitism but the evidence is irrefutable and it gives the lie to those who portray Irish republicanism as progressive.

This is the anti-Semitic IRA terrorist who is eulogised by Rev David Frazer and by Sinn Fein.  This year the annual South - O'Hanlon commemoration at Roslea on 1 January, which is organised by Sinn Fein, was addressed by Sean Lynch, a Sinn Fein candidate in the forthcoming Assembly elections.
Posted by Nelson McCausland MLA at 17:23