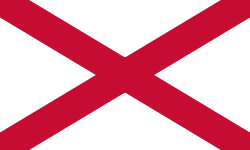 For many years Down District Council has used the Cross of St Patrick, a red saltire on a white backbround, as the principal flag at the St Patrick's Day parade in Downpatrick. 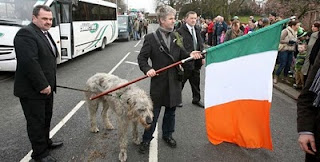 However this year Sinn Fein councillor Eamonn Mac Con Midhe objected to the use of the Cross of St Patrick and walked at the front of the parade with an Irish tricolour.  According to a report in the Belfast Telegraph (18 March) he claimed that the Cross of St Patrick had 'a military background'.  A report in the Down News (11 March) stated that he objected to it because it has 'associations with the Protestant Ascendancy'.
Some years ago in Belfast, when Caitriona Ruane ran the West Belfast Festival, she objected to the use of the Cross of St Patrick at the St Patrick's Day parade in Belfast and gave as her reason that it was linked 'with a regiment of the British army and the fascist Blueshirts'.  The former was a reference to the Irish Guards  and the latter to General O'Duffy's Blueshirts, who became part of Fine Gael, now the leading partner in the government of the Irish Republic.
Both she and her Sinn Fein colleague in Downpatrick omitted to say that the Cross of St Patrick has also been used by the Catholic Boy Scouts of Ireland, Irish Freemasons, the Church of Ireland and the former Irish state-owned shipping line Irish Shipping Ltd.  It also appears on the arms of Queen's University, Belfast, and the badge of the PSNI.
Moreover, if Councillor Mac Con Midhe is going to follow Caitriona's line and condemn flags because of their associations, he might reflect on the fact that the Irish tricolour, which he carried in the parade, was formerly known as the 'Sinn Fein flag' and was used by IRA terrorists.

So for the benefit of Eamonn Mac Con Midhe, here is the background to the Cross of St Patrick and for further information he may wish to refer to A History of Irish Flags from Earliest Times, which was written by Professor G A Hayes-McCoy and published in 1979.
The Sinn Fein councillor was also quoted in the Mourne Observer as saying, 'I have always wanted to fly the Irish flag and I believe it should be done. In all my years as a councillor I have not heard one positive word about [the Cross of St Patrick]. It does not represent St Patrick.'  But then does the Irish tricolour represent Patrick?  Of course not.  It is the flag of Irish nationalism and Irish republicanism and Patrick was neither an Irish nationalist nor an Irish republican.  Indeed the tricolour first appeared on 7 March 1848 when it was unveiled in Waterford by Thomas Francis Meagher, a leader of the Young Ireland movement.
The action of Councillor MacCon Midhe has damaged relationships in Downpatrick and was clearly designed as an election stunt by a Sinn Fein councillor who had no interest in good relations.
Posted by Nelson McCausland MLA at 03:16