The Celtic supporters club and the glorification of terrorism

Last Sunday there was a match between Ranger FC and Celtic FC in Glasgow.  Here in Northern Ireland many local supporters of these teams watched the game on television and in Londonderry members of the Paul McStay Celtic Supporters Club gathered to watch the game in a local bar. 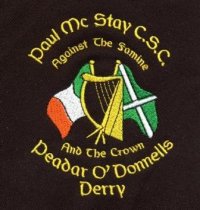 According to their Bebo site members of the Paul McStay Celtic Supporters Club use Peadar O'Donnell's Bar in Waterloo Street as their meeting-place and last Sunday they were joined in the bar by members of the Spirit of Freedom Republican Flute Band.
According to the Facebook site of the Spirit of Freedom Republican Flute Band: "Will be playing in Peadar O'Donnells, Watterloo Street, on Sunday 20th.  We will be playing in Support of Paul McStay Csc Doire for the Celtic and Rangers match. Were on at 2pm before and after the match. Band Members need to be there with all band equipment."
Lest there be any doubt that this actually happened, the Spirit of Freedom kindly posted a youtube clip of themselves playing outside the bar in Waterloo Street on their page http://www.youtube.com/watch?v=UWZcg1FihqQ  The youtube clip shows clearly the bass drum with a masked IRA terrorist on one side, holding an RPG7 rocket launcher, and a masked IRA terrorist with a rifle on the other side of the drum.
There was no parade and so this is not a matter for the Parades Commission although it is a timely reminder for the new Commission of the nature of this band.  However it may well be a matter for the PSNI, since this performance with this drum took place in the centre of the city, and it is certainly a matter for Celtic FC.
Celtic should surely take appropriate action against the Paul McStay Supporters Club for organising such an event for a Celtic match.  Do they think it appropriate for one of their supporters clubs to invite a band that carries such a blatant endorsement of republican terrorism?
Meanwhile I am sure that Paul McStay himself will not want to have his name associated with the glorification of terrorism.
Indeed it is rather amusing that the Paul McStay Celtic Supporters Club have on their badge a harp, a green version of St Andrew's Cross, an Irish tricolour, and the words 'against the famine and the crown'.  However Paul McStay, who played for Celtic from 1982 to 1997, was happy to accept an MBE from Her Majesty the Queen and is therefore a 'Member of the Order of the British Empire'.
Posted by Nelson McCausland MLA at 16:56