There are two interesting and related reports in the Belfast Telegraph tonight.
The first relates to the attempt by the PSNI Serious Crime Branch to subpoena tapes from the Boston College archive  in which former IRA members allegedly implicated Gerry Adams in crimes such as the murder of Jean McConville.  Among those interviewed were Brendan Hughes, a former Belfast IRA commander who died in 2008, and Dolours Price, a convicted IRA bomber.  Hughes said that Adams set up a secret murder squad in Belfast to kill 'the disappeared' and this was repeated in Ed Moloney's book Voices from the Grave, which was based on the interviews.

Apart from her interviews in the Boston archive, Dolours Price also referred to Adams at a republican commemoration in county Mayo in 2001.  On that occasion she said that it was 'too much' to listen to people now saying they weren't in the IRA and she added 'Gerry Adams was my commanding officer'. 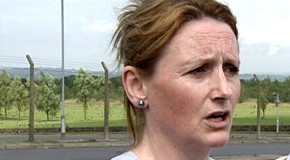 The second story concerns Marian Price, a sister of Dolours Price.  Both Marian and Dolours were part of an IRA team that bombed the Old Bailey in 1973.  Today Marian Price is a dissident republican and secretary of the 32 County Sovereignty Movement, the political wing of the Real IRA.  Marian Price's home in West Belfast was raided and she is now being questioned by detectives about dissident republican activity.
Adams has gone south of the border to Louth and a seat in the Dail but he cannot escape the questions about his role in the IRA, especially in Belfast in the early 1970s.  Those were the days when the IRA established its secret murder squad, developed the car bomb and then used it to terrible effect on Bloody Friday.
Republicans are good at asking for inquiries and demanding the truth from everyone else but they are guilty of the worst hypocrisy in that Adams and others refuse to tell the truth about their role in the IRA.  Not only does Adams refuse to tell the truth but he even denies he was a member of the IRA, in spite of all the evidence to the contrary from former Provisionals such as Hughes and Price.
There are many questions for Adams to answer and however much he tries to run away from them, those questions will pursue him until they are answered.  Otherwise they will pursue him to the grave.
Posted by Nelson McCausland MLA at 15:30