Avon Cosmetics - founded by the son of Ulster-Scots emigrants.

This morning BBC television reported that this is the 125th anniversary of the Avon cosmetics company, which is the world's largest cosmetics company.  I picked up on the item because the founder of the company was David Hall Mcconnell, a Scotch-Irish American whose parents emigrated from Ulster to America in the 19th century. 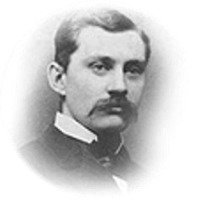 The roots of the company can be traced back to 1886, 125 years ago, when a young door-to-door salesman made the decision to sell perfumes, rather than books, to New York homes.  That young man was David Hall McConnell (1858-1937).  His parents, James McConnell and his wife Isabella Hall, were Ulster-Scots who emigrated from county Cavan to America in 1856, with their first son William, who was born in 1855.

Their second son David H McConnell was born on 18 July 1858 on a farm near Oswego City in upstate New York, where his father was a farmer and a brick manufacturer.
At first David planned to become a teacher but instead he left home in 1878 and began to sell books door to door.  In 1880 he joined the Union Publishing Company of Chicago and three years later he was placed in charge of the southern territory, making his home in Atlanta, Georgia.  In 1885 he married Lucy Emma Hays in Chicago and they had three children, two girls and a boy.

As an incentive to buy he designed a gift of a small phial of perfume.  McConnell blended the original scent himself, with the aid of a local pharmacist, and his perfiume became so popular that he gave up selling the books and organised the California Perfume Company.  The company was based in New York but was named in honour of a friend and investor from California.  McConnell believed that the door-to-door approach was well suited to the sale of cosmetics, particularly in rural areas where transport was still by horse and buggy and women had limited access to shops.

In 1895 McConnell built his first laboratory near his home in Suffern, New York.  He recruited as his first general agent Mrs P F Albee, a widow from Winchester, New Hampshire, and by 1897 McConnell had twelve women employees selling a line of eighteen perfumes.  This was possibly the first company to use a female work force to sell its products and the simple idea was that women would walk around their local area and sell the products to their neighbours and friends.  There was no need for shops and the idea of selling affordable products directly to the women's doors soon took off.

Year on year the business prospered and the number of sales kept growing and growing.  The California Perfume Company was incorporated in January 1916 and later became Allied Products Inc.and then Avon Allied Products Inc., the trade name Avon having been adopted in 1929.a

McConnell had other business interests and was treasurer of G W Camrick & Co., who manufactured pharmaceutical supplies in Newark, New Jersey, and a director of Holly Hill Fruit Products Inc., a fruit growing and canning business in Davenport, Florida.  He wasa also one of the founders of the Suffern National bank of which he became vice-president in 1901 and president in 1922.

David McConnell was a devout Presbyterian and he was instrumental in the formation of Suffern Presbyterian Church.He also played a major part in building the church and for many years he was superintendent of the Sunday school.  He also took a keen interest in education and he was president of the Suffern Board of Education.  In politics he was a Republican and was treasurer of the Rockland County Republican Committee.

He died in Suffern on 20 January 1937 and left the company to his son, David McConnell Jr.  At that point the sales force had grown to over 30,000 agents.  Today, after 125 years, Avon is still a leading brand name and one of a number of international brands established in America by Ulster-Scots and the sons of Ulster-Scots.
Posted by Nelson McCausland MLA at 15:11