The farmer and the pop-star

The barn on the road from Belfast to Bangor has long been a landmark.  On the side of it are the words of the John 3:16 'For God so loved the world that he gave his only begotten Son that whosoever believeth in him should not perish but have everlasting life.'  The text, in large white letters, is seen by thousands of motorists every day and it has been there for many years. 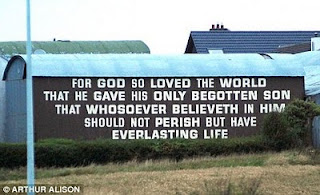 The owner of the barn and the farm is Alan Graham, a Christian who has served many years as a DUP councillor in North Down.  He is well known in the area but in the past weeek his name has appeared in newspapers all around the world, as the result of an encounter with pop singer Rihanna, who was in Ulster to perform at a concert and film a video.
Last week a field belonging to Alan Graham was hired to film a new video for an unnamed pop singer and on Monday filming started.  Of course the news that a pop singer was in the district drew crowds of spectators and journalists, eager for a sight of the pop superstar.
However not everyone is acquainted with the world of pop music.  Alan had never heard of Rihanna and had no idea what to expect.  As a result he was taken aback when he discovered that in the course of filming Rihanna had stripped to the waist and was walking around his field topless.  At that point he stepped in and said that filming should stop.  Rihanna covered up and after speaking to him the pop singer and the Christian parted on good terms.
The story soon spread around the world and was covered on news programmes in many different countries.  Of course the local media were able to produce some trendy individuals who condemned Alan Graham and spoke of the damage he had done to Northern Ireland.  That is only to be expected.  Much more significant were the folk who appeared on television and in the press and defended him.
One of the most insightful comments came from the English journalist Yasmin Alibhai Brown who said: 'Mr Graham made a brave stand against two of the worst excesses of modern life: the sexualisation of society and our celebrity culture ...  In his small, humble way this farmer demonstrated a kind of strength and conviction that used to be commonplace in society - and which, to our shame, has almost disappeared.'
She also posed the question: 'Why is it that the national conversation about the degradation of our natural world and physical environment is considered so respectable and urgent, while anyone who questions the degradation of our moral and social environment is treated like a leper or a lunatic?'
Yasmin's article was excellent and she was right on the mark in what she said.  Our society has become increasingly sexualised and female pop-stars, many of whom are overtly sexual, have bcome role models for young girls.

Alan Graham took his stand for what is right and he should be commended.  He was true to his faith and he has earned the respect of many people.
Rihanna has gone but the barn is still there and the text still speaks of the love of God.  Indeed pictures of the barn and the text have appeared in a number of newspapers and Alan himself has been able to share his Christian faith with many people in many lands.
Posted by Nelson McCausland MLA at 10:33