Recently I bought a book entitled Colonial New York: A History by Michael Kammen.  In it I came across a reference to a woman named Jane McCrea:

In 1777 the scene of action shifted upstate.  On the military side, Burgoyne invaded New York from Quebec on June 1.  A series of actions during July went largely in England's favour: the conquests of Ticonderoga, Skenesborough, and Fort Anne.  The brutal murder of Jane McCrea by Burgoyne's Indian allies on July 27, however, did much to galvanize the Mohawk Valley farmers into action.  General Schuyler found that recruiting became easier, and his army swelled in size.

The murder of Jane McCrea was obviously a significant event in the course of the war but who was this young woman? 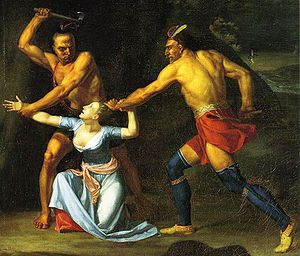 Jane McCrea (1752-1777) was one of the younger children in the large family of Rev James McCrea of New Jersey and his wife Catherine Rosebrugh and her family was thoroughly Presbyterian and Ulster-Scots on both sides.
Her father James McCrea, a Presbyterian minister and an Ulster-Scot, was born in Lifford in county Donegal and emigrated from Ulster to America with his father, William McCrea, who was an elder in White Clay Creek Church, near Newark, Delaware.  James McCrea trained for the ministry at the Log College, which was founded by another Ulster-Scot, Rev William Tennent.  Her mother Catherine, also an Ulster-Scot, was the daughter of Rev Robert Rosebrugh and niece of Rev John Rosebrugh.

After the death of her mother and the remarriage of her father, she lived with her brother John near Saratoga, New York, and there she became engaged to David Jones.  When the War of Independence started three of her brothers joined the revolutionary army but her fiance fled with other loyalists to Quebec. The war divided the McCrea family with some of the brothers serving on the loyalist side.

During the summer of 1777, as John Burgoyne's expedition neared the Hudson River, Colonel John McCrea took up his duty with a regiment of the Albany County militia.  Meanwhile her fiance was serving as a lieutenant in one of the loyalist militia units accompanying Burgoyne and he was stationed at Fort Ticonderoga, after it was captured.

Jane McCrea left her brother's home and set off to join her fiance at Ticonderoga.  She reached the village beside the old Fort Edward and was staying at the home of Sara McNeil, who was a loyalist and an elderly cousin to the British General Simor Fraser.

On the morning of 27 July 1777 a group of Indians, an advance party from Burgoyne's army, descended on the village of Fort Edward.  The two women were taken captive and they were separated.  According to the traditional account, there was a quarrel among the Indians as they were bringig Jane to the British camp and one of them killed and scalped her.  She had beautiful long hair and later her distinctive scalp was recognised.
News of her death was published in Pennsylvania on 11 August and in Virginia on 22 August and the story spread across America.  Her death and those of others in similar raids inspired some of the resistance to Burgoyne's invasion, leading to his defeat at the Battle of Saratoga.

The story of Jane McCrea became part of American folklore and an anonymous poet wrote The Ballad of Jane McCrea, which was set to music and became a popular folk song.  John Vanderlyn painted a picture of the death of Jane McCrea in 1803 and this and James Fenimore Cooper described similar events in his book The Last of the Mohicans.
Jane McCrea's body was first buried outside Fort Edward and a monument at the site marks that original grave.  Her remains were later moved to the Union Cemetery at Fort Edward and they were moved a third time to the new Union Cemetery, which lies between Fort Edward and Sandy Hill.
Posted by Nelson McCausland MLA at 16:16