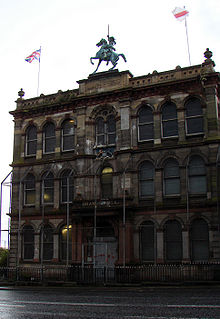 Yesterday I came across the following in a magazine I was reading:

I posted it here without really thinking about it but soon received a response stating that it was an urban myth.

Whether or not it was ever a rule for equestrian statues at some period in the distant past or in some country or culture, I do not know.  However it is clear that that around the world today there is no correlation between the horse's legs and the manner of death of the rider.
Posted by Nelson McCausland MLA at 12:23