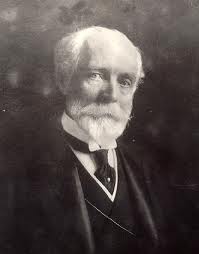 One hundred years ago, in March 1912, the United States ambassador in London, Whitelaw Reid, gave a lecture in the Assembly Buildings in Belfast, the headquarters of the Presbyterian Church.
Whitelaw Reid was invited to Belfast by the Presbyterian Historical Society and his subject was the Ulster-Scots in Ulster and America.
The invitation to Reid came at a time when Ulster and Ireland were in turmoil as a result of the third home rule crisis.  It was also a time of heightened interest in the Ulster-Scots, their role in the shaping of modern Ulster and their role in the making of the United States of America.
Whitelaw Reid (1837-1912) was the longtime editor of the New York Tribune.  In 1892 he was the Republican candidate for vice-president alongside Benjamin Harrison, who was the candidate for the presidency.  It is noteworthy that Harrison's mother had Ulster-Scots ancestry and that their Democratic Party opponents, Grover Cleveland and Adlai Stevenson, also shared Ulster-Scots ancestry.  This was a time when the Scotch-Irish were very much to the fore in almost every area of life in the United States.  Harrison and Reid were unsuccessful but Reid went on to serve as the United States ambassador to the Court of St James from 1905 to 1912 and he died on 15 December 1912.
On Wednesday night at 7.00 pm I am due to deliver the first Whitelaw Reid memorial lecture in the Assembly Buildings.  Entrance is free and everyone is welcome.
I will be speaking about the signficance of Whitelaw Reid, a Scotch-Irish American of Ulster-Scots descent with family roots in county Tyrone..  I will also be considering the context of the times, socially, culturally and politically.
Posted by Nelson McCausland MLA at 00:13