A robust debate at Stormont

Tonight there was a robust debate in the Assembly about the Girdwood development in North Belfast and both an initial motion from Alliance and and SDLP amendment were defeated. 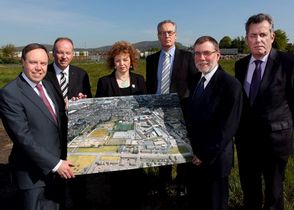 It was a good opportunity for me to explain the failure of the two previous DSD ministers who abandoned a cross-community agreement on a shared site.  It was also an opportunity to challenge and correct some of the misinformation and indeed disinformation that has emanated from some SDLP politicians.  That was particularly important since Mark H Durkan MLA was at it again.  During his speech he claimed that the Housing Executive's cohesion unit had been dismantled, which is untrue, and that a planning application for the SDLP vision of 200 houses was at an advanced stage.  In fact no planning application was ever submitted.  But then this is what we have come to expect from the SDLP - short on facts but big on fiction and fantasy.
Unfortunately, when I correcting his misinformation, Mr Durkan was busy talking to the member beside him and didn't seem to want to hear the facts.  I chided him for not listening when I was addressing his claims and I was rather amused when some SDLP members seemed annoyed by my use of the term 'boy' in the course of what I said.
It is actually an interesting word and perfectly respectable in the context in which I used it.  In the Assembly we are entitled to speak in the language of choice, whether English, Irish, Ulster-Scots or whatever.  It is therefore worth looking at the use of the word in Ulster-Scots and in Ulster dialect.
The Scottish National Dictionary, the Concise Ulster Dictionary and The Hamely Tongue all explain a variety of ways in which the word can be used.  These include the following from the Scottish National Dictionary:
1. A term of commendation and praise (always with the definite article) - for example the following appears in a Scottish volume published in 1903.  'If a beast wis gaun fur to pu’ ma heid aff,' remarked Macgregor, who had grown suddenly bold, 'I — I — I wud gi’e’t a kick!' 'Ye’re the boy!' said his father.

The word is not restricted to Scotland but is also used in Ulster and is attested in James Fenton's book The Hamely Tongue, which is an account of the language as spoken in county Antrim.  It is also worth noting that the word is used in Ulster dialect and at least one SDLP member from the west of the province can be heard using it in the corridors at Stormont.  Generally members are expected to translate any word or phrase they use but with words that occur in Ulster dialect there is certainly no need for translation!
But back to Girdwood, perhaps with the debate out of the way we can now get on with the important work of developing the site as a shared site that is accessible to folk from every community.  It is a marvellous opportunity and one that we must not allow others to squander.

Posted by Nelson McCausland MLA at 14:57