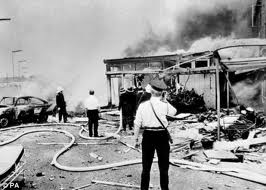 Tonight's television documentary about Bloody Friday was a powerful piece of television and a solemn reminder of one of the worst days in the worst year of the Troubles.
Forty years ago, on Friday 21 July 1972, the Provisional IRA set off more than twenty bombs in Belfast causing chaos and terrible death and destruction.  Nine people were killed and around 130 injured, with some of them receiving terrible injuries.
It was not the first example of IRA mass murder that year.  On 20 March an IRA car bomb in Donegall Street killed six people and injured another 100 and four days later the Conservative prime minister Edward Heath announced the prorogation of Stormont.
On 14 April there were 23 bomb explosions across Northern Ireland and on 14 May Republican News said that the Provisional IRA car bombing campaign, which had been running since early in the year, was aimed at 'striking at the colonial economic system'.  Meanwhile in Libya Colonel Gaddafi, speaking at a rally in Tripoli on 11 June, said he had supplied arms to 'the Irish revolutionaries who are fighting Britain.'
On Sunday 28 May a Provisional IRA bomb exploded prematurely in Anderson Street in the Short Strand area, killing four members of the IRA and four other people as well.  The IRA try to forget just how many Roman Catholics they killed.
Sinn Fein and the republican movement are attempting to rewrite history.  Their strategy is to pick out certain episodes in the Troubles, such as Bloody Sunday, focus attention on them, and hope that other episodes, where the Provisional IRA were the perpetrators, will gradually fade from the public memory and be quietly forgotten.  I have listed just a few of the events in that year, including Bloody Friday, but it is Boody Sunday which has received almost all the attention.  We cannot allow them to get away with that and tonight's programme is to be welcomed.  Indeed it is a programme which deserves to be repeated.
The programme reported that 150 IRA men took part in the IRA operation.  Gerry Adams was one of the most senior IRA men in the city at that time and indeed he had been one of the five IRA men who took part in a secret meeting with the Conservative government in London on 7 July, just two weeks before Bloody Friday.
One short clip in the programme was an interview with Adams when he was asked about Bloody Friday and what role he played on that day.  Adams said 'None' but then Adams has perfected the art of dishonesty.  There cannot be any doubt that he knew all about Bloody Friday and knew most of those involved.

The Bloody Friday programme ended with the words 'No Republican was prepared to appear on the programme.'  We hear constant demands from republicans for inquiries, one after another, and constant demands for the truth.  However they themselves refuse to tell the truth.
My colleague Nigel Dodds has raised the Bloody Friday atrocity in the House of Commons at Westminster.  He tabled an Early Day Motion, backed by the eight DUP MPs and Mark Durkan of the SDLP.  'That this House notes with sadness that July 21, 2012, marks the 40th anniversary of the Bloody Friday bombings in Belfast ; further notes that the events of the day were some of the most horrific acts of terrorism ever carried out by the IRA, which set off 22 bombs in the city centre in an 80-minute period, killing nine people and injuring 130 others including 77 women and children; and recognises that many of the victims and their families still bear the mental and physical scars to this day, that we should never forget to honour the memory of those killed and that justice demands that those in the republican movement and Sinn Fein leadership with information should now come forward to provide truth and closure for the victims.'

Nigel Dodds said, 'It is appropriate that on the 40th anniversary of this event that we remember this attack which was aimed not at any military or security target, but at the ordinary people of Belfast.  there has been a great deal of talk about reconciliation amongst some republicans but an important first step must be that those who were involved in this terrible atrocity might come clean and admit their role.'

He continued, 'It is well known that Gerry Adams was a senior figure in the Belfast IRA at the time of Bloody Friday yet he will not even admit to having been a member of that organisation.  Not only should those who were involved step forward and bring forward information about what happened that day but they should also explain exactly why bombs were placed outside railway stations, bus stations and shops.'

Some republicans claim that the IRA were surprised by the death toll on Bloody Friday and had not expected it but that excuse is simply not credible.  They had already seen the death toll in the Donegall Street bombing on 20 March, when they murdered six people.

The Early Day Motion and the documentary are small steps in truth recovery but nevertheless they are important steps and must be followed by others.  It is important that, as long as republicans refuse to answer the questions, we keep on asking them until we do get answers.

Sinn Fein are going on a charm offensive in the Irish Republic and questions about Bloody Friday and the disappeared are the last thing they want, especially since Gerry Adams is now in the Dail and especially since he was a leading member of the IRA in Belfast back in 1972.

Bloody Friday was produced and directed by Lena Ferguson who deserves great credit for researching and creating this exceptional programme.

Posted by Nelson McCausland MLA at 15:34