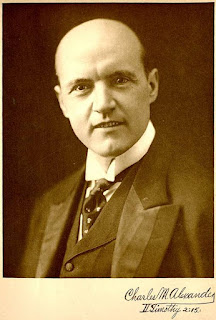 One of the joys of life is the discovery of a good book in a second-hand book shop and today I came across a copy of Charles M Alexander: A Romance of Song and Soul-Winning, which was written by his widow, Helen Cadbury Alexander, and J Kennedy Maclean and published in 1921.
Charles McCallon Alexander (1867-1920) was a famous singing evangelist and successor to Ira D Sankey.  The following short obituary is taken from the New York Times (14 October 1920):

Birmingham, England, Oct 13: Charles McCallon Alexander, the successor of Ira B Sankey as the foremost singing evangelist of the world, died suddenly at his home here this morning.  Charles M Alexander was born Oct. 24, 1867, at Maryville, Tennessee.  Early in life he engaged in evangelistic work directing his activities with great success to organizing and conducting large chorus choirs.  He accompanied the Rev R A Torrey on an evangelistic tour of the world, which occupied four years, from 1902 to 1906.  Dr Alexander made a second tour of the world with his wife, formerly Miss Helen Cadbury of Birmingham, in 1906 and 1907.  He was the compiler of several volumes of hymns, and was engaged in evangelistic work in New York City from 1908 to 1918.

During his tour with the Rev R A Torrey he made the 'Glory Song' famous throughout the world.  At the Royal Albert Hall, in London, he conducted for two months the largest evangelistic choir ever organized, 4,000 persons joining daily in the great services.  He is said to have held copyrights of more gospel hymns than any other man.  With his wife he organized the Pocket Testament League, that has pledged 2,000,000 persons to carry a Bible or Testament always with them, reading a chapter a day.  The League gave 1,000,000 New Testaments to service men in the war.  The services he held here that will be best remembered were those held with J Wilbur Chapman in Carnegie Hall and the Central Presbyterian Church in Brooklyn.  Just before he left this country, five weeks ago, Dr Alexander inaugurated a Bible revival campaign under the auspices of the Methodist and Presbyterian Churches.

As a small boy I learned to play the piano and one of the music books I was given to play was Alexander's Hymns.  I was therefore familiar with the name of Charles M Alexander from an early age.  Alexander's Hymns is less popular than it was at one time but copies of it can still be found in many churches and mission halls.
With the name Charles McCallon Alexander, you might guess that he was a Scotch-Irish American and of Ulster-Scots descent and indeed you would be right.  His parents were John Darius Alexander and his wife Martha Jane McCallon and the biography I purchased records the following of his father.

John D Alexander, a young descendant of  John McKnitt Alexander, one of the famous family of seven brothers  who had fled from the North of Ireland to escape religious persecution.  Everywhere they carried their staunch Presbyterian faith, providing many ministers to teach the evangelical truth dear to their fathers.

A number of Scotch-Irish Americans of Ulster descent have contributed much to gospel hymnody and their contribution deserves to be recognised.  Charles M Alexander was one of them.

Posted by Nelson McCausland MLA at 13:36